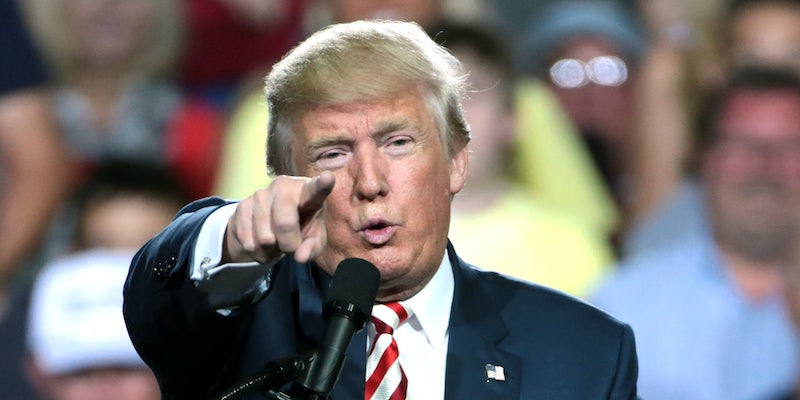 Trump apparently has no qualms about it.

QAnon is a conspiracy theory that holds that an international cabal of Satanic pedophiles controls the world. They believe that Trump is trying to take down this network, which includes the so-called “deep state.”

Trump has previously given subtle and not-so-subtle nods to the conspiracy theory.

This marks Trump’s first endorsement of a QAnon follower.

There are numerous followers running for Congress. All are Republicans.

After Rep. Ilhan Omar (D-Minn.) was elected to office, Greene said, “We have an Islamic invasion into our government offices,” Politico reports. She also insisted that Muslims shouldn’t be allowed to use the Quran in their swearing-in ceremonies.

Facebook has removed at least one of Greene’s ads for violating its policies against inciting violence. In the ad, she brandished a rifle and warned “antifa terrorists” to “stay the hell away from Northwest Georgia.”

In the early morning hours, Greene celebrated her victory by complaining about “fake news reporters” and bullying an 18-year-old on Twitter so badly that he deactivated his account.

Greene purged her social media history of QAnon materials prior to announcing her bid for Congress. She reportedly gained much of her following by espousing the theory.

However, proof remains of her belief in the baseless theory that, among other things, believes that John F. Kennedy Jr. is alive.

“The comments made by Ms. Greene are disgusting and don’t reflect the values of equality and decency that make our country great,” House Minority Whip Steve Scalise (R-La.) said in June.

Many are wondering how the party will react now that she has become its candidate in a safe, deep-red seat.

The president appears not to share his GOP colleagues’ presumed reservations about being tied to a QAnon follower who once said Black people should feel “proud” of Confederate monuments because they represent progress made since the Civil War.

“Congratulations to future Republican Star Marjorie Taylor Greene on a big Congressional primary win in Georgia against a very tough and smart opponent. Marjorie is strong on everything and never gives up – a real WINNER!” Trump tweeted.

Greene will now face Democrat Kevin Van Ausdal, an IT specialist, in November.