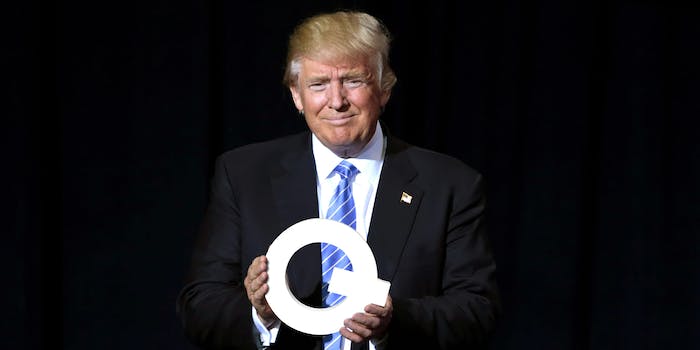 Why Trump and the QAnon conspiracy are inextricably linked

If there was Hillary Clinton there would be no Q Anon.

On Sept 6, President Donald Trump held another of his seemingly endless campaign rallies, this time in Montana to support Republican Senate candidate Matt Rosendale. While most observers watched the 90 minutes of freewheeling blather for signs of the president’s reaction to the anonymous op-ed written in the New York Times by a disgruntled staffer, some were watching for a Trump QAnon link.

Believers in the QAnon conspiracy theory watched because anonymous avatar Q hinted it would be a watershed moment in Trump’s battle against the deep state cabal.

Q has spent recent weeks hyping the declassification of 20 pages of the FISA warrant used to surveil Trump staffer Carter Page, due to his alleged ties to Russian intelligence.

Those pages might someday be declassified. But they weren’t mentioned at the rally—yet another in a long string of great earth-shaking political events hyped by Q that fizzled out or failed to materialize.

Not that it matters to Q believers. They went right past the failure of Trump to mention the FISA papers and instead decoded several gestures and phrases Trump used as “proof” that Trump is linked to Q, and is letting Q followers know it.

Even without a direct public link between Q and Trump, Q fans see the invisible hand of the president in almost everything. His every word, gesture, and action is dissected by QAnon researchers to reveal the hidden shoutouts to Q.

Another example was Trump’s tweet after the anonymous New York Times op-ed from a disgruntled staffer.

His expression of “TREASON?” was picked over by Q believers for signs that it was a signal to usher in the mass arrest of traitors and saboteurs. But yet again, the arrests failed to materialize—and the Q believers moved on to the next clue.

This devotion to Trump should not be surprising.

Trump QAnon: Why they are linked

Trump has enthusiastically embraced the conspiracy theory community, and they, in turn, have lavished praise upon him. And the QAnon movement is inextricably linked to Trump, despite Trump never having actually acknowledged either Q or the “great awakening” conspiracy theory.

Even before he formally ran for president, Trump was a huge hit in the far-right world that had already spent years hammering Barack Obama for his alleged links to Islam, supposedly fake birth certificate, and supposedly sealed college transcript.

Trump spent the first part of the decade offering up a slew of tasty quotes about Obama’s past, alleging that “nobody knew him” growing up, insinuating that his birth certificate was fake, offering millions of dollars to charity if Obama published his college transcripts, and even alleging that a health department official in Hawaii was murdered after certifying Obama’s birth certificate as real.

His entry into politics did nothing to slow Trump’s proclivity for conspiracy theories, as he embraced everything from crackpot theories about Hillary Clinton’s health to allegations that Supreme Court Justice Antonin Scalia was murdered.

Given Trump’s spouting of the most half-baked and evidence-free allegations floating around conspiracy theory message boards, he’s a natural fit to be enthusiastically accepted by the conspiracy community.

And that enthusiasm has only grown in the nearly two years since Trump’s election—particularly with the rise of QAnon.

From the start, Q claimed that the identity of the person doing the posting was known to fewer than ten people in military intelligence. And Q has stoked the rumors that he’s either Trump or directly linked to Trump with a series of photos alleging to show Trump’s signature on newly signed papers, and the inside of Air Force One.

No matter who Q turns out to be, Trump was so well situated to take advantage of a conspiracy theory like Q because the far right has spent decades soaking in conspiracy theories against the Clintons, everything from Whitewater and Travelgate in the 90s to Benghazi and “Hillary’s Health” in the run-up to the election. QAnon is the natural extension of the literal right-wing conspiracy movement—even if Trump has nothing to do with it.

Believers in the Q conspiracy see Trump as nothing less than the savior of the world, a bulwark of Godly patriotism standing against the deep state cabal of pedophiles and Democrats that’s controlled politics for generations. Because he’s been the one fighting for them since before he was in power.

I truly believe that @realDonaldTrump isn’t just the leader of the free world, but the savior of it as well.

May God bless America— the last stand for western civilization.

Some believers even think Q is Trump, as evidenced by some apparent links between the timing of Trump tweets and Q drops—though these links are almost entirely circumstantial, and the notoriously tech-phobic Trump doesn’t appear to know how to use anything other than Twitter.

But he doesn’t have to. Just his standard-issue ranting is interpreted by believers as making nods to Q through misspellings in tweets, word choices, and the timing of messages from Trump vs. Q drops.

#Qanon is an operation that COORDINATES w/Trump. Takes a LOT of observation/investigation, but one can use statistical analysis/laws of probability to prove #Q. It HAS been done. Trump's ABUNDANCE of tweet-misspelling coordination w/Q long ago ruled out possibility of coincidence

Of course, Q believers even have a reason for why Trump hasn’t mentioned Q: because nobody has directly asked him about it.

But when White House Press Secretary Sarah Huckabee Sanders was asked about Q in August, she offered a boilerplate statement about the president condemning violent groups and quickly moved on.

And as of July 2020, Trump still hasn’t been asked about QAnon, a sticking point for believers. His dozens of winks and nods though have helped given a fervor to the movement that otherwise should have collapses.

You can’t imagine Hillary Clinton doing something like that.

And this odd limbo leaves Q believers analyzing a seemingly endless series of clues, telling themselves that they’re inching ever closer to the Great Awakening that Trump will unleash—while the event itself seems ever out of reach.