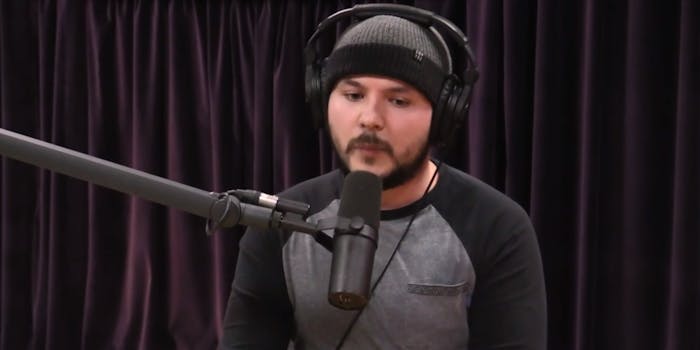 He thinks women don't like him because they believe in gender equality.

A resurfaced Tim Pool video has the internet in stitches over his claim that he can’t find a wife because of feminism.

Pool is among the cast of characters who emerged from the corners of the internet during Donald Trump’s presidency to rise to a state of quasi-celebrity. Most people have probably never heard of him, but for a certain sect of the Make American Great Again crowd, the beanie-topped internet personality is a yuge deal. (Remember yuge? Oh, the times we’ve had these last few years.)

Like many of his cohorts, Pool makes his bread by spouting an endless font of right-wing talking points and conspiracy theories, setting himself apart from the Alex Jones of the world with a serious expression and calm, measured tone. He most recently predicted a 50-state Trump landslide.

Feminism is one of his favorite subjects. He’s opposed, of course.

On a February episode of his show called “Feminist politics has made dating nearly impossible,” the former Vice News writer lamented that at the ripe old age of 33, he still doesn’t have a family, whereas his father had two kids by the time he was 27.

“You know what the problem is though, it’s definitely not me,” Pool said. “I think it’s everybody else.”

A lot of people brought The Simpson’s Principal Skinner memes to the party.

The internet could not stop laughing at Pool’s claim that women don’t like him because they’re feminists, or perhaps because he probably hasn’t washed his beanie since 2015.

“Can you die of humiliation on someone else’s behalf?” Alex Leo responded.

“If you ever say the phrase ‘it’s not me, it’s everybody else!’ it’s you,” tweeted @RReanimator.