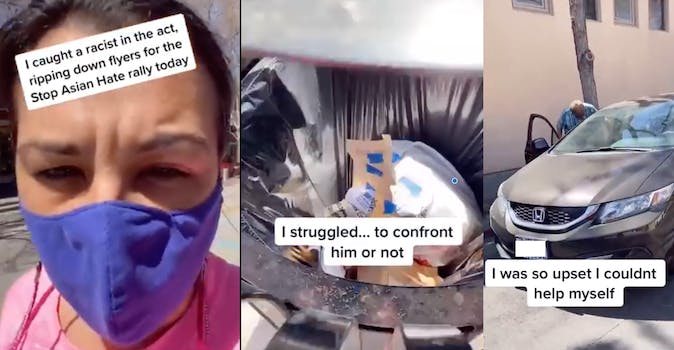 TikToker tells man: 'You have hate in your heart.'

On Sunday, residents of Mountain View, California protested hate crimes against the Asian American and Pacific Islander (AAPI) community. The youth-organized march, part of a growing movement opposing hate crimes against AAPI peoples, included a moment of silence for Pak Ho, a 75-year-old man killed in Oakland last month in what police indicate was a racially motivated robbery.

Over the weekend, a TikToker posted a confrontation with a man she claims was tearing down flyers for the march.

“This guy right here just ripped off these flyers,” TikToker Rayah Sunshine says at the beginning of the video. “…What a jerk.”

She approaches the man, whose identity is unknown, as he climbs into the passenger side of a parked car. “You really should be ashamed of yourself ripping off those flyers,” she yells at him. “I saw you.”

“Who are you to tell me what to do?” the man responds.

“You should’ve left your hands off of those,” she later says. “Those aren’t your flyers.”

The man continues arguing, but Rayah is undeterred.

People congratulated Rayah profusely in the comments. Many called her an ally for Asian Americans. “Thank you for standing up for us!” said one.

Many mocked the fact that the man rode away in a Japanese car. “And he drives a Honda. How ironic,” said one.

Crimes against the AAPI community have risen drastically during the pandemic. Last month, the Center for the Study of Hate and Extremism at California State University reported a 149% increase in hate crimes against Asian Americans in 2020. Separately, Stop AAPI Hate cataloged 3,800 hateful incidents, most involving women.

Scholars believe the increase is largely motivated by racist statements and sentiments about the COVID-19 virus, most prominently by former President Donald Trump, who was among those who insisted on calling it the “China virus” and “Kung flu.”

But racism against AAPI people is nothing new; the recent wave of hate crimes has launched what many view as a long-overdue reckoning concerning racism against Asian Americans.

The march and rally in Mountain View was part of the movement to recognize and eradicate such racism.

In captions, Rayah wrote on the TikTok, which has nearly 50,000 views as of this writing, “I caught a racist in the act, ripping down flyers for the Stop Asian Hate rally today.”

The man appeared unmoved by her admonishments. That didn’t seem to bother her.

“Well, that’s okay. Wait until this goes viral,” Rayah says near the end of the TikTok.

“Help me find this jerk.”