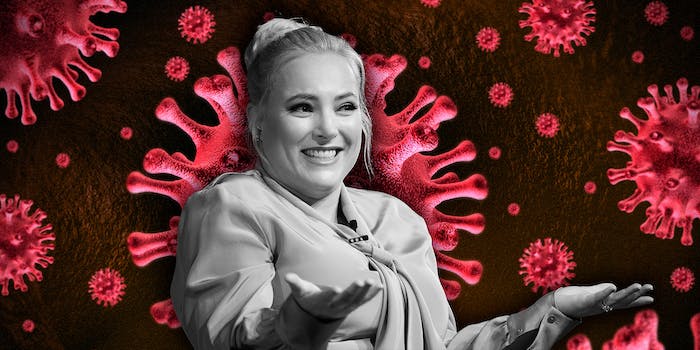 'I don’t have a problem with people calling it whatever they want,' McCain said last year.

Meghan McCain called for an end to “Asian hate” this week but was quickly reminded of her previous defense of anti-Asian language.

In a Twitter post on Wednesday, McCain, known best for her role as a host on The View, shared an image denouncing discrimination after a shooting in Atlanta the day prior had left eight people dead, including six Asian women.

But Twitter users swiftly noted that almost exactly one year prior in March of 2020, McCain had defended then-President Donald Trump’s use of the term “China virus.”

While many argued that the term was bigoted and counter-productive, defenders of Trump, including McCain, supported its use.

“I don’t have a problem with people calling it whatever they want,” McCain said. “It’s a deadly virus that did originate in Wuhan.”

McCain at the time even stated that “P.C.” liberals complaining about the issue would end up getting Trump re-elected before describing his use of the term as “effective.”

The conservative also argued against concerns that the term fed into negative stereotypes about Asians, further defending Trump’s stance towards China.

“There’s a lot of anger about our reliance on the Chinese government right now, and our reliance on China in so many ways,” McCain said. “And that messaging from President Trump and his messaging from the very beginning that we need to remove our trade from China is going to be very effective going into 2020.”

McCain’s co-hosts warned in response that such language could lead to a spike in anti-Asian hate crimes, which had already begun rising at the beginning of the coronavirus pandemic.

Despite McCain’s replies on Wednesday being flooded with claims of hypocrisy, the conservative has thus far declined to weigh in on the criticism on Twitter.