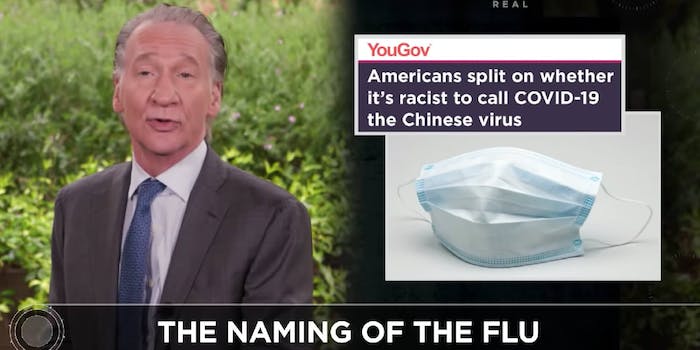 'It’s not racist to point out it’s batsh*t crazy to eat bats.'

During his new online show, Real Time host Bill Maher defended calling the coronavirus “Chinese virus,” seemingly pointed to individuals who eat bats as the originators of the virus, and then promised he isn’t racist.

“So when someone says, ‘What if people hear ‘Chinese virus and blame China?’ The answer is ‘We should blame China.’ Not Chinese-Americans; but we can’t stop telling the truth because racists get the wrong idea. There are always going to be idiots out there who want to indulge their prejudices,” he said during the New Rule segment on Friday night.

He pointed to a slew of viruses and their names to make his case.

“Scientists, who are generally pretty liberal, have been naming diseases after the places they came from for a very long time,” he said. “So why should China get a pass?”

He added that “liberalism lost its way” when the “PC police” began dubbing attacks on non-Western cultural practices “racist.”

In mid-March, President Donald Trump, along with some senior members of his administration, began trying to brand the coronavirus as the “Chinese virus.”

The World Health Organization (WHO) warns against naming viruses after geographic locations or specific groups, claiming it may have “unintended negative impacts by stigmatizing certain communities or economic sectors.” And several WHO officials have specifically addressed the monikers popping up for COVID-19.

Director-General Tedros Adhanom Ghebreyesus called the stigma surrounding the coronavirus “more dangerous than the virus itself.”

While Trump has since back-tracked on the rebranding crusade, the label has stuck with some. The FBI has warned of a potential uptick in hate crimes against Asian-Americans, according to FBI analysis obtained by ABC News. Attacks on Asian-Americans are averaging 100 per day, according to the Hill.

“It’s not racist to point out it’s batshit crazy to eat bats,” Maher also said during his show.

While the pandemic is believed to have originated in a wet market in Wuhan, China, it is uncertain which animal the virus came from.