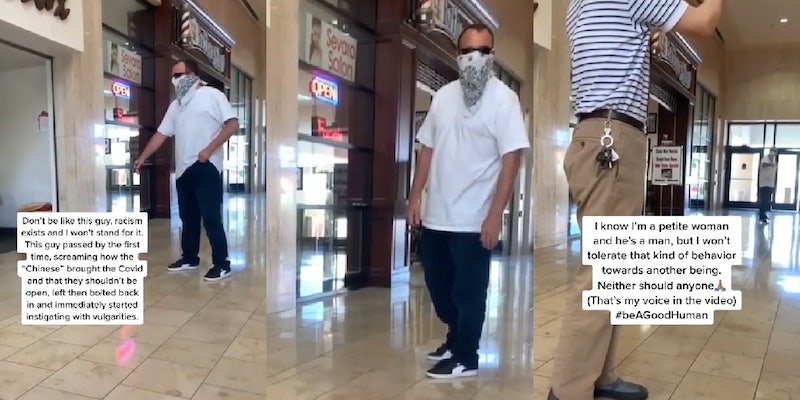 ‘Don’t be like this guy’: TikToker confronts racist man complaining about Asian-owned spa

'What is wrong with you?'

A TikTok video shows a woman confronting a white man who’s throwing a tantrum in front of an Asian-owned spa at a shopping mall.

The video was taken by Alexis R., @flexmesomelexxi on TikTok, whose profile says she’s a fitness advocate.

Alexis posted the video of the mall altercation with the caption, “Be a good human #stopthehate #asianlivesmatter.”

She says she took the video at an Asian massage and reflexology shop at Paradise Valley Mall in Phoenix. The racist wears a banada over his face as he complains about the spa’s prices.

“Don’t be like this guy,” Alexis wrote in the overlay text. “Racism exists, and I won’t stand for it. The guy passed by the first time, screaming how the ‘Chinese’ brought the COVID.” She added the guy left the store before storming back in and “instigating with vulgarities.”

“I know I’m a petite woman, and he’s a man, but I won’t tolerate that kind of behavior towards another being,” she wrote. “Neither should anyone.”

“Ten minutes for 12 dollars?” the man says in the video. “In this economy, you think that’s a good price?

Alexis tells the man that the business’ prices are fine and that she uses its services regularly.

“You’re one person. I don’t see too many other people,” the man says. Alexis tells him that the shop had other customers since she’s been there.

She asks the man directly why he’s picking on the Asian business owners.

“You shut the fuck up,” the man tells her.

“What is wrong with you, dude?” she asks. “You’re yelling at a girl?” As the man walks out of the shopping mall, he yells back that she’s a “bitch.”