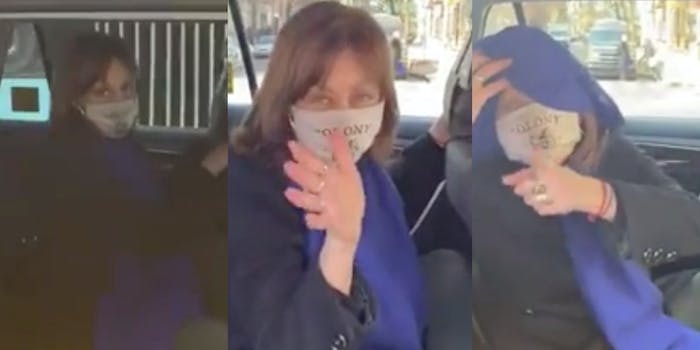 She says the incident, caught on video, was a 'misunderstanding.'

A clip of the incident has been making the rounds online. It quickly rose to the top of Reddit’s r/PublicFreakout, collecting nearly 4,000 upvotes in less than a day.

The clip begins after the initial altercation has passed. According to the man who posted the video, 31-year-old Dan Lee, he and a friend were told to “go back to China” by an unknown woman. He then followed the woman, who has since been identified as Maura Moynihan, to her cab, where he confronted her over her racist outburst.

“Well, isn’t that where you’re from?” asks Moynihan, who’s seated in the back seat of her cab.

Lee says that he and his companion aren’t from “Communist China.”

“Where you from?” Moynihan says. When Lee says “I’m from the U.S.,” she stumbles through a half-baked question that is clearly headed for “but where are you really from” before she cuts herself off.

“Look, I don’t want to talk about this anymore,” Moynihan says. Lee says that “no shit” she doesn’t want to further discuss her racism.

“No shit,” Lee says. “You’re on camera.” Moynihan lifts her scarf to cover the top portion of her face. Her lower face is already concealed by a face mask.

She tells Lee to leave her alone. “Oh, you’re going to cover your face now,” he says. “You’re ashamed!”

“No, no,” Moynihan says, peeking out from under her scarf. “Because you’re the type of asshole…” Her diatribe is cut off by the cab driver, who has made multiple attempts to interject. He begins driving, and the car inches away as Lee calls Moynihan a “dumb shit.” She responds with a raised middle finger.

The clip sparked outrage across the web and immediately initiated a search for the woman behind the scarf. WABC-TV led the charge and ultimately identified her face mask as originating at a performing arts theater in Woodstock. The news channel confirmed via multiple sources that Moynihan was the woman in the clip.

WABC-TV reported that by Tuesday, Moynihan’s social media accounts had been deleted. The outlet tracked down her home and discovered that she’s neighbors with Lee and his companion, Maria Ha. When WABC-TV finally got in touch with her, Moynihan admitted that she is the woman in the video.

Moynihan said in a statement that the dispute was a misunderstanding. “It had nothing whatsoever to do with any bias or racism or anti-Asian American prejudice, as has been wrongly suggested,” she said.

Moynihan claimed the altercation was spurred by a dispute over a cab and that she never made any racist remarks. However, WABC-TV reports that Moynihan admitted privately to “hurling a racist remark.”

“I have devoted most of my life to working with and for Asian people, most particularly in the cause of securing basic human rights for the Tibetan people in their continuing struggle against Communist China,” she said.

Lee said, however, Moynihan’s past deeds do not excuse her behavior in this instance. Following her statement, she expressed interest in meeting with Lee and Ha to “explain.” They aren’t interested.

“What she said wasn’t an apology,” Ha said. “We don’t accept they behavior at all, so I don’t wanna meet her. Why would I meet her?”

“This is extremely hurtful,” Lee added. “Like for me personally I was born in the U.S. my entire life and to be told to leave this country, to go back to Communist China is seriously offensive. I was born here, this is my home.”

There is currently an ongoing police investigation, according to WABC-TV.