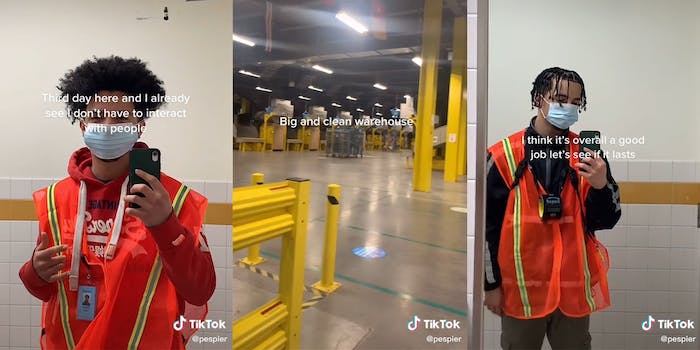 ‘Bro a paid actor’: TikToker’s video about working at Amazon is so positive that people think he must be a plant

‘Lmfao bro’s family tied up behind the camera.'

A TikToker is being accused of posting sponsored content for Amazon after sharing an overwhelmingly positive job review video that goes over some of the company’s benefits.

“I heard Amazon was lit, so you know I applied,” a superimposed text overlay reads. “Here’s my review; Big and clean warehouse; Orientation boring, but that’s regular; Third day here and I already see I don’t have to interact with people; I just stack the packages on pallets, it’s literally like playing Tetris; Fourth day working and I already got my benefits.”

The video then goes over the benefits Amazon employees can allegedly enjoy, such as healthcare after a few days on the job and college tuition reimbursement.

“I think it’s overall a good job let’s see if it lasts,” the video concludes.

With Amazon’s alleged reputation of generally being a harsh work environment thanks to current and former employees who have shared their experiences via social media, commenters didn’t buy the reality TikToker, @pespier, was seemingly trying to sell.

The job review was called out by commenters, with some accusing the TikToker of being a paid actor or posting sponsored content without a label.

“Nah as soon as he started talking about benefits I knew it was staged,” one commenter wrote.

Other commenters shared their experiences of working for the online retailer.

“I came home every day with blood in my shoes and they didn’t let us take our breaks properly,” one commenter wrote. “I’m good.”

Another commenter pointed to the specific phrasing used in the video, stating that only someone from Amazon might write the tagline.

“‘I heard Amazon was lit,’ literally no one except the ones in charge of Amazon would say that,” they alleged.

The Daily Dot reached out to @pespier through a TikTok direct message and a comment on the video as well as to Amazon directly regarding the video’s authenticity.