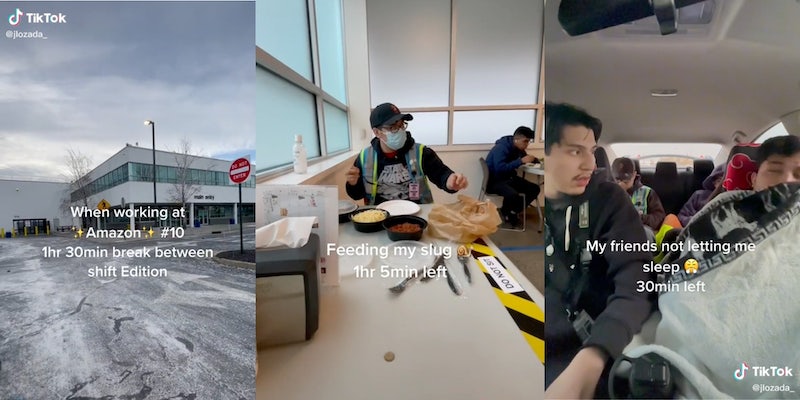 He can be seen trying to sleep in his car alongside other employees.

A viral TikTok video showing an Amazon worker rushing to eat and sleep between his warehouse shifts has highlighted what many feel are the company’s grueling working conditions.

In a clip posted on Wednesday, TikTok user @jlozada_ showed how he spends his 90-minute break while preparing for his second shift at a company warehouse in New Jersey.

The video begins with the employee showing his “far walk” to reach the time clock before he’s able to get in a meal in the warehouse’s beak room. The worker eventually makes his way to his vehicle for a short nap with his co-workers with just 30 minutes to spare.

The footage is just one of numerous videos in which @jlozada_ chronicles his work for the online retailer, all of which have been inundated with debate over working conditions.

In another video, @jlozada_ details how he is unable to buy and eat food during a normal 30-minute lunch break.

Another alleged Amazon worker noted in the comments that they often have to order food long before their break in order to ensure they have enough time to eat.

“[Y]a that’s why I don’t eat out in my break or if I want to treat myself I doordash it 30min before my break,” the user said.

The Daily Dot reached out to @jlozada_ for comment but did not immediately receive a response.

Amazon has long been criticized for its treatment of workers, whether those in warehouses or those delivering packages.

TikTok has offered new insight into the company as workers and customers alike document their experiences.

Earlier this month a customer was criticized after asking an Amazon delivery driver to dance on camera. Another popular clip showed an employee attempting to deliver a package despite being confronted by a bear.

Amazon did not respond to an inquiry made by the Daily Dot Friday on @jlozada_’s viral TikTok video.