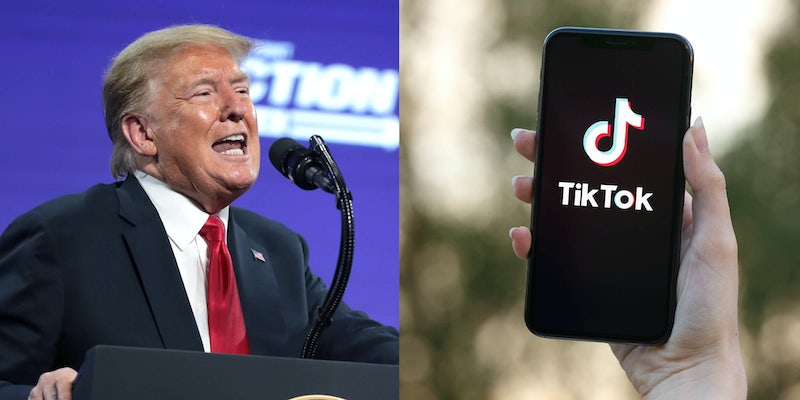 TikTok says it will sue over Trump’s ban

The company said on Friday it would 'pursue all remedies available to us.'

TikTok said on Friday that it would “pursue all remedies available to it” to fight President Donald Trump‘s executive order that would effectively ban the popular app in the United States.

On Thursday, Trump issued an executive order that banned U.S. transactions with TikTok. He also issued a similar order for WeChat.

The order would go into effect 45 days from now, aligning closely to a window Trump created for Microsoft to talk about purchasing the U.S. portion of TikTok.

Trump’s order cites that TikTok “automatically captures vast swaths of information from its users,” which is not uncommon for any social media app. Concerns have been raised about the possibility of TikTok, which is owned by a Chinese company, sending data to China’s government, as the country has a history of requiring tech companies to hand over data.

TikTok has vigorously defended itself, saying that U.S. user data is stored within the country.

In response to Trump’s order, the popular app said it was “shocked” and hinted that it would pursue legal action to defend itself.

“For nearly a year, we have sought to engage with the U.S. government in good faith to provide a constructive solution to the concerns that have been expressed. What we encountered instead was that the U.S. Administration paid no attention to facts, dictated terms of an agreement without going through standard legal processes, and tried to insert itself into negotiations between private businesses,” the company wrote in a statement on Friday.

TikTok also mentioned a possible sale of its U.S. business in the statement, before saying it is considering legal action.

“We will pursue all remedies available to us in order to ensure that the rule of law is not discarded and that our company and our users are treated fairly—if not by the Administration, then by the U.S. courts,” the company said.

Microsoft confirmed earlier this week that it was considering purchasing TikTok, saying that it wanted to complete discussions about an acquisition “no later than Sept. 15.”