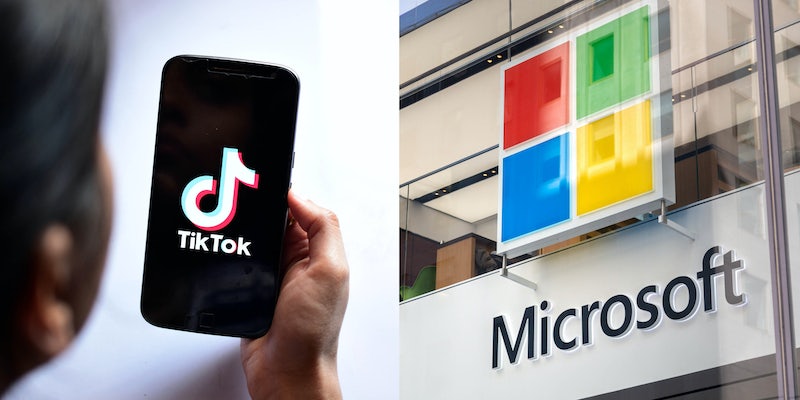 The potential deal comes as Trump has said he was considering banning the app.

Microsoft CEO Satya Nadella spoke with President Donald Trump about the tech giant acquiring the popular video app TikTok and is still exploring a potential purchase of the app, the company announced.

The announcement from Microsoft comes as Trump told reporters late last week that the United States was close to banning the app amid concerns about it being owned by a China-based company.

The idea of banning TikTok in the United States has been rumored for weeks. Trump also campaigned on concerns that have been raised about the app.

TikTok has repeatedly denied any influence from the country and denied any American user data is shared with China.

However, according to Reuters, the president agreed to let Microsoft explore an acquisition of TikTok for the next 45 days.

Microsoft seemed to confirm this timeline, saying that it wanted to complete the discussions “no later than September 15.”

“Following a conversation between Microsoft CEO Satya Nadella and President Donald J. Trump, Microsoft is prepared to continue discussions to explore a purchase of TikTok in the United States,” the company said in blog post on Sunday.

The company said any potential acquisition would be “subject to a complete security review and providing proper economic benefits to the United States, including the United States Treasury.”

Microsoft also seemed to hint at concerns that have been raised about user data, by noting that it would “ensure that all private data of TikTok’s American users is transferred to and remains in the United States.” TikTok has repeatedly said that U.S. user data is stored within the country, with a backup in Singapore.

The deadline for a potential deal was imposed by the Committee on Foreign Investment in the United States (CFIUS), Reuters reported.

This wouldn’t be Microsoft’s first foray into social media—it owns LinkedIn—but it would push the company squarely into one of the fastest growing and hugely popular sphere of social media companies.