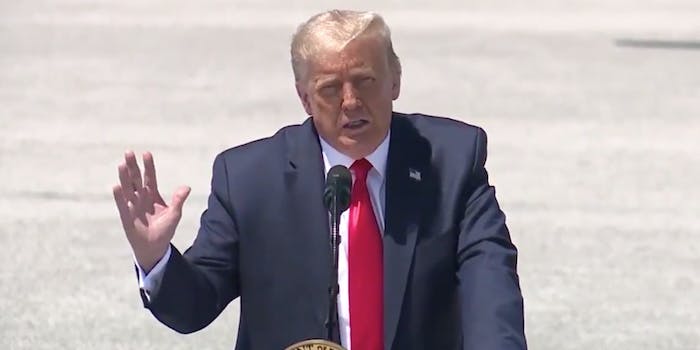 Speaking on a tarmac at an airport in Cleveland, Trump accused the presumptive Democratic nominee of catering to a “radical left agenda.”

The statement is similar to one Trump made just last week while speaking in Texas in which he alleged that Biden would “wipe away every trace of religion from national life.”

In a statement on the remark, Biden campaign spokesman Andrew Bates stated that the former vice president, who is Catholic, is driven by his faith.

“Joe Biden’s faith is at the core of who he is; he’s lived it with dignity his entire life, and it’s been a source of strength and comfort in times of extreme hardship,” Bates said.

The campaign spokesman went on to challenge the assertion that Trump is an ambassador for religion.

“Donald Trump is the only president in our history to have tear-gassed peaceful Americans and thrown a priest out of his church just so he could profane it – and a Bible – for his own cynical optics as he sought to tear our nation apart at a moment of crisis and pain,” Bates said. “And this comes just one day after Trump’s campaign abused a photo of Joe Biden praying in church to demean him, in one of the starkest expressions of weakness throughout this whole campaign.”

Trump also used his speech to claim that a Biden presidency would result in a disruption in the markets “the likes of which our country has never seen.”

“He’s going to do things that nobody ever would ever think even possible, because he’s following the radical left agenda,” Trump said.