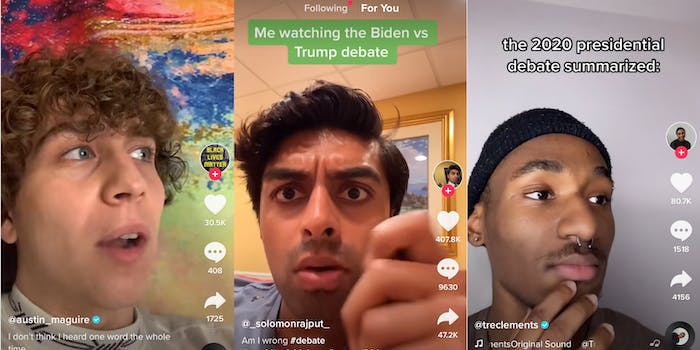 They made plenty of content with what little substance there was.

President Donald Trump and former Vice President Joe Biden debated for the first time on Tuesday. It made for plenty of viral TikTok content.

TikTok’s response to the bickering between America’s two presidential choices comes at a time when the app’s fate in the U.S. is up in the air amid Trump’s potential TikTok ban.

Many creators made their own impression of the debate. One TikTok user, @austin_maguire, posted a video arguing with herself.

“I don’t think I heard one word the whole time,” she captioned the video.

She laid two tracks of her own voice to make it sound like the two candidates arguing for more air time.

“The 2020 presidential debate summarized:” the user wrote along with a video of him yelling gibberish.

One TikTok user reacted to the bickering by putting an audio from the Lifetime show Dance Moms in the background of his video. The audio features Abby Lee Miller in a screaming match with a mom.

“Me watching the Biden vs Trump debate,” the creator wrote along with a video of his shocked face.

Other TikToks reacted to what little content there was at the debate. This one commented on Trump’s dig at Biden’s son, Hunter Biden.

The video shows the creator with her hand over her mouth with somber music playing in the back.

Biden spoke about his son overcoming addiction while Trump interjected conspiracies about him. The Trump campaign has repeatedly attack Hunter Biden for his position on the board of Burisma, a Ukraine energy holding company.

Senate Republicans released a report that said his position was problematic but did not have a “clear impact” on U.S. policy, refuting Trump’s claims.

Lastly, this TikToker posted a video with a popular audio clip of singer Cardi B saying “that’s suspicious… that’s weird” to when Wallace asked Trump to denounce white supremacy and Trump did not give a clear answer.

Instead, Trump name-checked the white nationalist group the Proud Boys and told them to “stand by.”

TikTok barely missed a download ban on Sunday. The ban would prevent new users from downloading the app. But, due to the postponement, TikTok has more time to settle a deal with new American owners in order to comply with Trump’s ban.