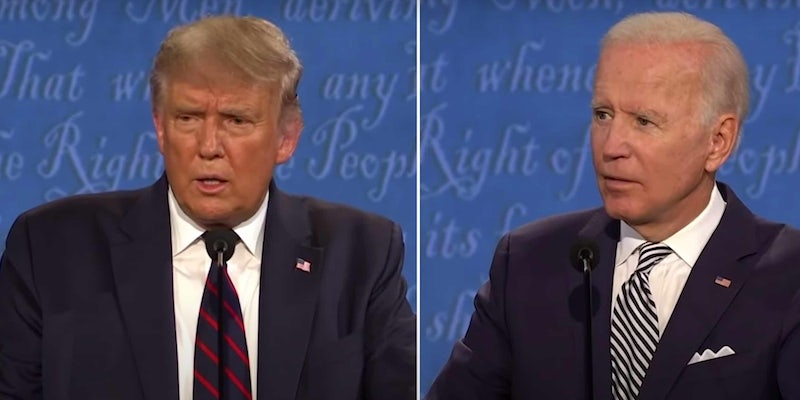 His comments empowered a dangerous group.

At last night’s debate, amid the cacophony and cattiness, one moment stood above the rest. When moderator Chris Wallace asked President Donald Trump to condemn white supremacy, he told one of his most prominent and racist fan groups, the Proud Boys, to “stand by.”

It was a shocking moment, and one Trump’s team and biggest defenders want you to believe didn’t happen. Their reasoning? Trump essentially shrugged and said whatever when asked about it at the onset of the discussion.

Here’s the full clip, for context.

“Are you willing to condemn white supremacists and militia groups?” Wallace asked.

“Sure,” Trump said. “Sure I’m willing to do that,” he added, before pivoting to “antifa.”

And though he’d already agreed to condemn white supremacy, Trump then blustered about more specific labels and groups.

“What do you want to call ’em? Give me a name,” Trump asked. And when given the name of a white supremacy group, Trump then, instead of condemning them, told them to “stand by.”

Worse yet, he then said “but somebody’s gotta do something,” which right-wing groups have considered an endorsement.

In the post-debate discussions, Trump’s team is hinging on the word “sure” and using it to claim the media is misrepresenting his comments.

“He did call them out,” White House spokesperson Hogan Gidley said on CNN. “When he was asked… he said ‘sure.'”

“That debate was garbage but this is the actual transcript of the white supremacy exchange. Trump didn’t ‘refuse’ to denounce white supremacy, as much of the media is now saying. Look at his first reply,” she tweeted.

Others agreed that Trump’s half-hearted response and immediate backtrack was more than enough for them.

Trump’s response was a missed opportunity to denounce fringe pockets of white nationalists. It was not the denial needed to put down a growing domestic terror threat, if only because it overnight has emboldened white supremacists to crow on social media.