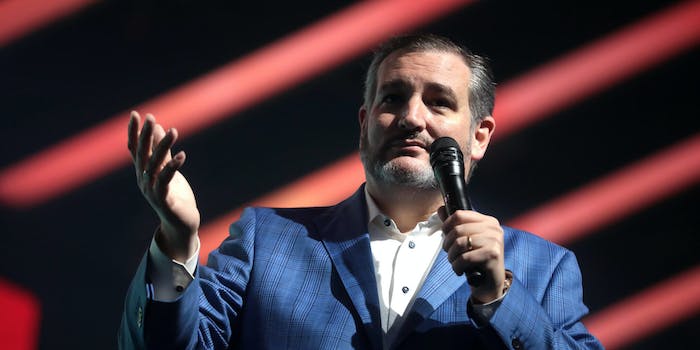 'Does the GOP no longer stand for the free market?'

“In my judgment, we are facing what I consider to be the epic battle of our generation, quite literally the battle over whether we remain a free market nation,” Cruz said at the time.

Since then, Cruz seems to have switched sides in that “epic battle.”

In one scene, which TheWrap describes as “a minor plot point,” the film’s characters originally determined that the zombie apocalypse originated in China.

Fearing the Chinese origin of the virus would jeopardize the film’s release in the Asian nation and reduce profits, Paramount changed it.

In an obvious attempt to draw parallels between a fictional zombie apocalypse and the coronavirus pandemic, and Hollywood and the media, yesterday Cruz tweeted, “Did you know that Hollywood in the movie World War Z willingly edited out the source of the virus that caused the fictional zombie pandemic—China—in an effort to appease the Chinese communist censors?”

In recent months, Republicans have repeatedly lobbed accusations that Democrats and the media are parroting Chinese propaganda about the coronavirus.

People were quick to point out to Cruz that World War Z is fiction, and, besides, isn’t worshiping the almighty profit margin sort of the American way? The Chinese film market is one of the most lucrative in the world, after all.

“So what it’s a movie. Pretend,” replied actor Patricia Arquette.

To date, more than 35,000 Texans have been infected with coronavirus.