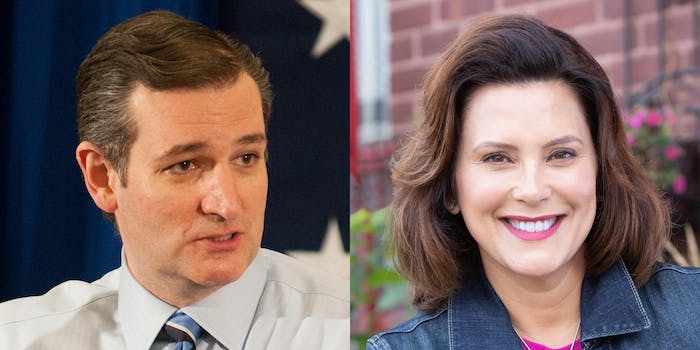 Ted Cruz tries to dunk on Michigan governor, self-owns so hard he has to delete his tweet

She called him out.

Cruz on Sunday retweeted an article about a recent Michigan emergency order that allows fines of up to $1,000 for violating social distancing during the coronavirus pandemic. The article included a photo of Whitmer doing a ceremonial signing while a group of people looked on.

There was just one problem with Cruz’s attempted dunk: The picture was more than a year old.

Within an hour, Whitmer herself corrected him. She tweeted that the old photo was “being misused to spread fear and anger.”

“I know you would never intentionally mislead the public during a pandemic, so I’m hopeful you’ll correct this mistake as soon as possible,” Whitmer added.

CNN correspondent Brian Stelter tweeted, “Why senators shouldn’t rush to dunk on others based on a too-good-to-be-true tweet.”

Cruz quickly deleted the tweet. He does not appear to have apologized or issued a correction.