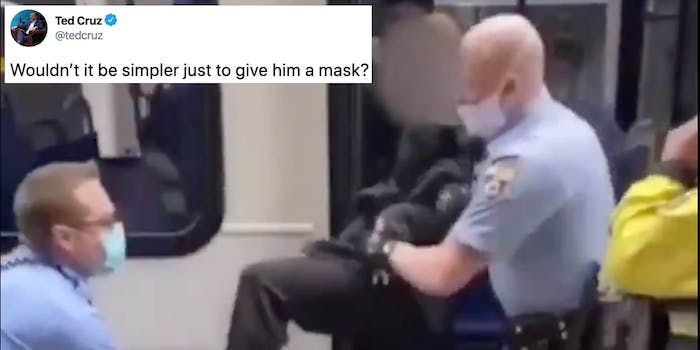 Sen. Ted Cruz (R-Tx.) has weighed in on a video that went viral last week showing a man being drug off a bus by police for not wearing a mask.

The incident took place in Philadelphia on Friday and raised questions about how local governments are dealing with the coronavirus pandemic.

“Wouldn’t it be simpler just to give him a mask?” Cruz remarked.

The Philadelphia Police Department responded to the outcry over the matter by stating that the bus driver, employed by the Southeastern Pennsylvania Transportation Authority (SPTA), had called officers to the scene.

The driver was attempting to enforce a new policy that demanded all passengers wear a mask. The man refused to leave when asked by the driver as well as the officers.

But issues regarding the policy arose not long after. SEPTA admitted that while it had instituted the new rule just one day prior, it had failed to adequately alert riders to the change.

“We didn’t do a good enough job notifying the public about this,” SEPTA spokesperson Andrew Busch said.

Although riders are encouraged to wear masks, SEPTA has since stated that the policy is no longer mandatory.

“SEPTA urges customers to wear facial coverings in an effort to help prevent the spread of COVID-19, consistent with new CDC guidelines and strong recommendations from Pennsylvania Governor Tom Wolf,” the agency said. “While SEPTA urges riders to cover their faces, those who refuse will not be barred entry to the system.”

As far as Cruz’s suggestion that passengers be given masks, it doesn’t look like that will be happening anytime soon given the nationwide mask shortage.

The federal government has instead called on the public to make face coverings of their own.