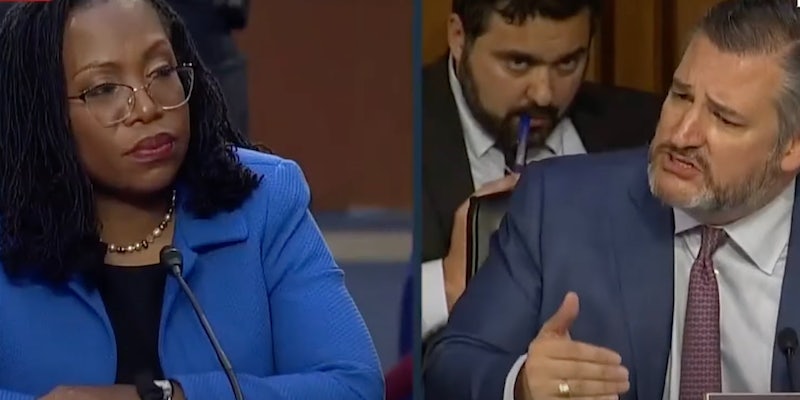 A photographer spilled the tea.

United States Supreme Court nomination hearings are a spectacle like few others in American politics. While many participate in good faith, some politicians use the hearings to bolster their public profiles with grandstanding and, as Sen. Ben Sasse (R-Neb.) described it on Wednesday, “jackassery.”

After a performance in Wednesday’s hearing that led even his former law professor Alan Dershowitz to blast him for “bigotry,” Sen. Ted Cruz (R-Texas) was caught checking his Twitter mentions.

A photo of Cruz looking at his phone began circulating Wednesday afternoon. Los Angeles Times reporter Nolan D. McCaskill noted that Cruz appeared to be looking himself up on Twitter. His colleague at the Times, photographer Kent Nishimura who was positioned behind Cruz, confirmed it.

“He was searching Twitter for his name, this was right after his exchange with Chairman [Dick] Durbin [D-Ill.],” Nishimura tweeted.

They referred to it as “vanity surfing” and Cruz as a “confirmed name searcher.” Another called him “thirsty”—presumably for a drink of that sweet ambrosia only Ted Cruz himself can brew.

Insults and jokes flooded the timeline.

Some felt that it was disrespectful to the hearings.

“If they can’t take the judiciary process seriously, they shouldn’t be on the committee,” tweeted one.

Many brought up another time that Cruz blew off doing his job: his infamous trip to Cancun amid Texas’ historic winter storms last year.

“Are we sure he wasn’t looking at flight prices to Cancun?” said @JuanSaaa.