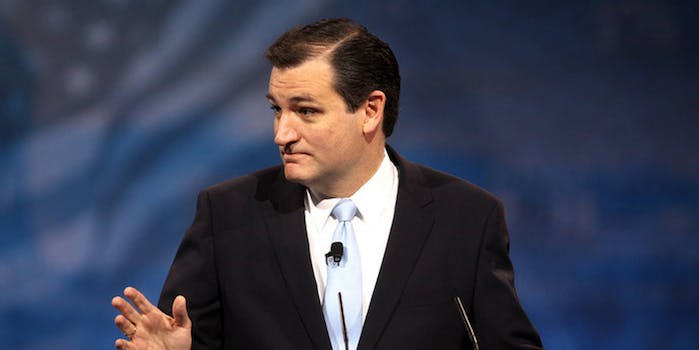 There will be only one.

Ted Cruz has ended his campaign for the Republican presidential nomination, erasing any lingering doubt that Donald Trump will be the GOP nominee.

Cruz’s exit follows a loss to Trump in the Indiana GOP primary, which the Texas senator described as a must-win for his campaign. The victory gave Trump a virtually insurmountable lead over his opponents.

Speaking before a crowd of supporters in Indianapolis, Cruz called on Americans to embrace the conservative causes that defined his campaign. Without mentioning Trump once, however, Cruz called it quits.

“The movement that you have started is extraordinary. I love each and every one of you. From the beginning, I’ve said that I would continue on as long as there was a viable path to victory,” Cruz said. “Tonight, I’m sorry to say that path has been foreclosed.”

Saying that his supporters “gave it everything we’ve got,” Cruz acknowledged that “voters chose another path.”

Trump has 1,041 pledged delegates and may walk away with more by the end of the night. The New York real-estate mogul technically needs 1,237 total delegates to secure the nomination.

Reince Priebus, chairman of the Republican National Committee, tweeted that Trump “will be the presumptive GOP nominee” following Cruz’s exit.

.@realDonaldTrump will be presumptive @GOP nominee, we all need to unite and focus on defeating @HillaryClinton #NeverClinton

With Cruz out of the race, only Ohio Gov. John Kasich, who has only earned 153 delegates, remains to challenge Trump.

Cruz vowed to continue to “fight for liberty” just before exiting the stage in Indianapolis.

Update 9:07pm CT, May 3: Priebus, the RNC chair, tweeted that Trump will be the “presumptive GOP nominee” but later deleted the post, likely due to a spelling error. He reposted the same message soon after.