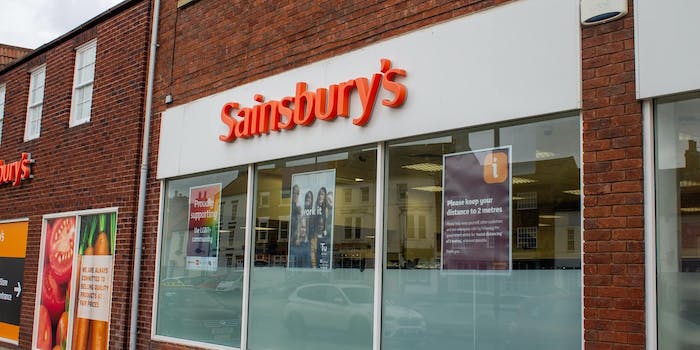 'I can now enjoy an almost racist-free shopping experience.'

The statue of 18th-century slave trader Robert Milligan was removed from its place in front of the Museum of London Docklands on Tuesday, spurring a boycott of the unrelated supermarket chain Sainsbury’s due to a mistaken belief that the great-grandson of its founder is responsible.

The statue was taken down in response to a popular petition calling for its removal by local Labour councillor Ehtasham Haque, a local protest which included covering the statue’s face and attaching a Black Lives Matter sign to it, and a request from the museum itself “on the grounds of its historical links to colonial violence and exploitation.”

However, a belief that Lord Sainsbury is both the primary donor to the museum and entirely responsible for the removal of the statue has spread across Twitter, leading to some of those who oppose the removal of monuments to slave traders calling for a boycott of the supermarket chain his great-grandfather founded.

The misinformation about Lord Sainsbury’s involvement seems to have started with a tweet from Mason Mills. In it, he claimed that the museum was funded by the Sainsbury family, the statue was taken down solely at the request of the museum, and the “government had no involvement.” He also attempted to connect the removal of the statue to Lord Sainsbury’s opposition to Brexit (the UK’s exit from the European Union).

The hashtag #BoycottSainsburys was spawned in the replies to Mills’ tweet and from there, further misinformation spread, including a claim the Sainsbury family owned the Museum and statue outright.

Some of the confusion may come from the fact that the Linbury Trust, founded by Lord Sainsbury and his wife, did donate $10-million to the Museum of London in 2018. However, this does not mean that Lord Sainsbury is the primary source of funding for the museum or that he has any particular influence over its decisions or policies.

“The Museum of London advocated for the removal of the Robert Milligan statue, working closely with Tower Hamlets Council and the Canal & River Trust, who are the local authority and the landowner, respectively,” a museum spokesperson told the Daily Dot. “This decision was made independently of our sponsors and donors.”

In response to the outrage over the statue’s removal and the claims that it was an attempt to erase history, Councillor Ehtasham Haque told the Daily Dot that “during the removal, the statue of Robert Milligan didn’t bleed, feel any pain or die, like millions of victims of slavery.”

“Removing it was history and people know more about Robert Milligan now than they did from walking past it all these years,” he said. “I hope people who are unhappy about this decision will consider reading and learning more about the history of slavery and be more sympathetic to the descendants of the victims.”

Meanwhile, the #BoycottSainsburys hashtag has been largely taken over by those who approve of the statue’s removal, and who are expressing their delight over less crowded supermarkets and a “racist-free shopping experience“.