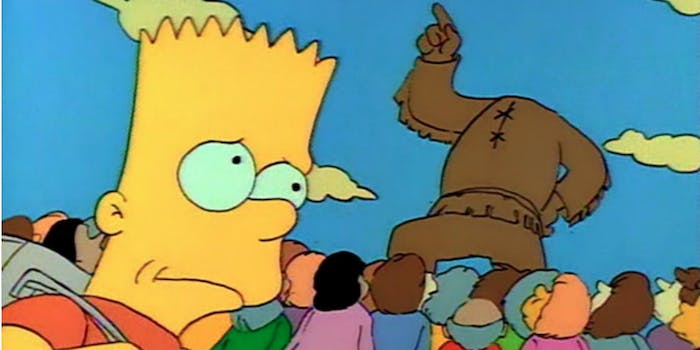 The episode features a similar act, but the sentiment is much different.

In the last week, statues of slave owners and Confederate monuments have been removed by the people, as anti-racism and police brutality protests continue around the globe. But “Simpsons predicted it” is being applied to the latest one.

On Tuesday night, a statue of Christopher Columbus was beheaded in Boston’s North End. As CBS Boston reports, the statue was previously beheaded in 2006 and painted with “Black Lives Matter” in 2015. But it was quickly pointed out that a similar beheading took place on The Simpsons in season 1, episode 8, when Bart cuts the head off a statue of town founder Jebediah Springfield.

In the 1990 episode, “The Telltale Head,” Bart beheads the statue to impress a group of bullies, and later returns it when guilt overtakes him, admitting he hadn’t considered what the statue means to Springfield. So it doesn’t really mirror the sentiment behind why people are beheading or pulling down Columbus statues—one was also torn down by protesters Tuesday night in Richmond, Virginia, and tossed into a nearby lake.

In the last few months, there have been more Simpsons parallels with reality, including a news anchor greeting an audience from home during lockdown, and a Japanese flu infecting Springfield, causing residents to beg for a vaccine, as killer bees attack (a reference to “murder hornets“). But people are also trying to shoehorn recent events, like the burning of a Minneapolis police precinct or The White House with the lights out, into Simpsons episodes out of context.

Boston Mayor Marty Walsh commented on the beheading, stating: “Given the conversations that we are certainly having right now in our city of Boston and throughout the country, we are going to take time to assess the historic meaning of the statue.”