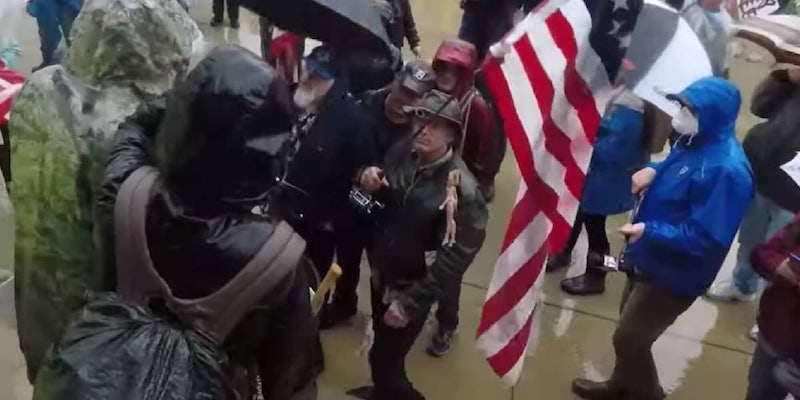 Video of the incident shows some demanding the police intervene.

Protesters converged at the Michigan State Capitol to protest anti-lockdown measures enacted by the state’s governor but quickly turned on each other after a tug of war over a doll broke out, according to MLive.

The rally—led by Michigan United for Liberty, a conservative activist group—took place on the building’s steps on Thursday morning as protesters railed against Governor Whitmer’s stay-at-home order.

Despite the heavy rain, about 300 people braved the inclement weather to attend the rally, according to MLive.

Many showed up wearing rain gear but no face mask. They appeared already fired up, carrying American flags, protest signs, and even armed with weapons.

As state officials debated over whether protesters should be allowed to carry weapons, it was the dark-haired barbie doll hanging on a noose that turned the crowd violent.

A brief tussle occurred among two protesters when a woman objected to a man displaying an American flag that had an unclothed female doll with a noose around the neck. The fight ensued as the woman and man jostled over the flag and others joined in.

Onlookers in the crowd demanded that state or local police intervene, and eventually a dozen state troopers came to escort the man into the Capitol building.

Lt. Brian Oleksyk, the Michigan State Police public information officer, told MLive that officers interviewed the man. The man claimed he had issues with the protester he sparred with prior to the rally.

“We took his report, we will investigate thoroughly and file our report,” Oleksyk told MLive.

Michigan State Police say, according to MLive, that no one was injured, arrested, or issued a citation.