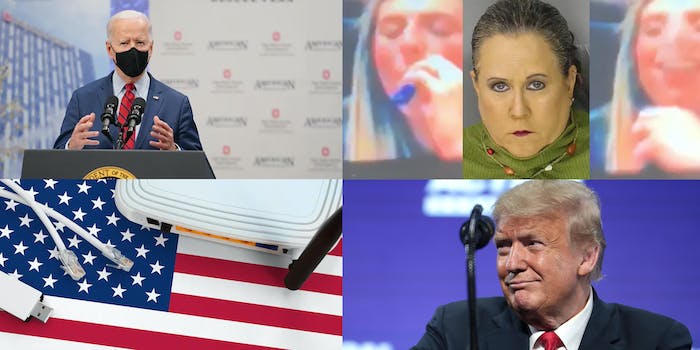 Trump’s executive order directed a section of the Commerce Department to petition the Federal Communications Commission (FCC) to “clarify” Section 230. Trump signed the order after Twitter fact-checked several of his tweets.

The former president became fixated on the law, which shields all websites from being liable for what users post on them, as his presidency ended.

The executive order was vehemently criticized at the time. It also faced a lawsuit from a consumer advocacy group that argued it was unconstitutional.

In October, former FCC Chairman Ajit Pai agreed to move forward with Trump’s executive order after the agency collected public comments on it (which were flooded with automated messages decrying alleged censorship of conservatives).

But in late January, Pai admitted that the agency would not act on Trump’s order.

Trump’s social media executive order was one of several that Biden revoked. There was no explanation given by the Biden administration as to why Trump’s order was included among those that were revoked.

Whether you’re a cannabis user or simply into alternative medicine, there’s a good chance you’ve heard about Delta-8 THC. Unlike the Delta-9 THC found in what we think of as traditional pot, Delta-8 provides a milder experience.

Think a cup of coffee to a cup of espresso. But that’s just the beginning.

How is Delta-8 different than traditional cannabis? Let our explainer walk you through the details.

The case against a Pennsylvania mom accused of making deepfakes has begun to fall apart after prosecutors admitted that it couldn’t prove the claim.

During a preliminary hearing on Friday, prosecutors backed away from their allegations regarding manipulated media and Raffaela Spone, the 50-year-old woman accused in March of harassing her daughter’s cheerleading rivals by sharing deepfakes of them drinking, vaping, and posing nude.

But the so-called deepfake video, which appeared to show Hame vaping, immediately spurred skepticism among experts. Although the claim from Hame and police that the footage had been manipulated was widely promoted with little-to-no pushback, an exclusive investigation by the Daily Dot in April uncovered serious issues with the allegations.

Bucks County District Attorney Matt Weintraub appeared to suggest in a March press conference regarding Spone, who had been charged with three counts of cyber harassment of a child and one count of harassment, that investigators had come to their conclusions after performing a metadata analysis.

Yet in comments to the Daily Dot, Hilltown Township Police officer Matthew Reiss, who carried out the arrest against Spone, admitted that the department never located the so-called deepfake video.

Instead, just like what was seen on NBC News, investigators merely had a cell phone recording taken by Spone of the vaping video being played on what appeared to be a laptop.

A new study shows that the digital divide and broadband availability gap in the United States is much higher than what the government currently says it is.

The FCC estimated last year that 14.5 million Americans lacked access to broadband. However, a new report from BroadbandNow released this week shows that number is much higher, checking in at 42 million.

BroadbandNow manually checked more than 58,000 addresses using “check availability” tools from 11 large internet service providers (ISPs) to see whether wired or fixed wireless service was available. The addresses were from areas that at least one of those 11 ISPs offered service according to a form the FCC has where ISPs self-report whether broadband is being served.

That form, Form 477, has been criticized in the past because if an ISP offers service to just one one home in a Census block, the FCC counts that entire area as having access from that provider.