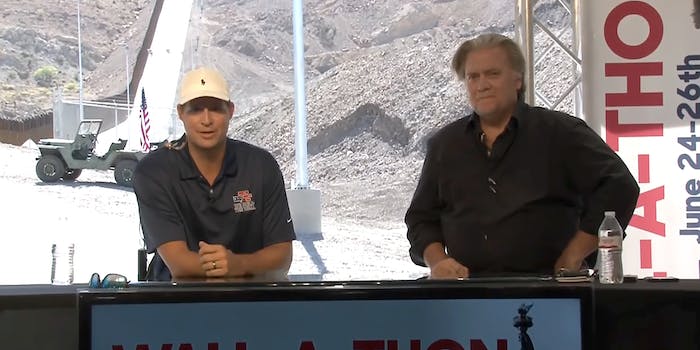 'We're on the million-dollar yacht of Brian Kolfage... who took all that money from Build The Wall.'

Former White House adviser Steve Bannon joked about stealing funds from his “We Build the Wall” campaign one year before being arrested for exactly that.

Bannon, alongside three other men including Iraq War veteran Brian Kolfage, were taken into custody on Thursday after allegedly defrauding thousands of donors by stealing cash designated for a private wall on the country’s southern border.

Federal prosecutors say Kolfage, who started the online crowdfunding campaign, was given at least $350,000 of the $25 million fund by Bannon. Kolfage is accused of spending the cash on everything from cosmetic surgery and jewelry to payments for a high-end boat.

Following the arrest, video from a 2019 livestream fundraising event called the “We Build the Wall Wall-A-Thon” resurfaced online. In one part of the six-hour event, Bannon joked that money raised for the wall was actually being used for Kolfage’s boat.

“Welcome back and this is Stephen K. Bannon. We’re off the coast of Saint-Tropez in southern France, in the Mediterranean,” Bannon jokingly said as he and Kolfage livestreamed from New Mexico. “We’re on the million-dollar yacht of Brian Kolfage. Brian Kolfage—who took all that money from Build The Wall.”

Kolfage’s boat appears to have been an open secret for some time. A reporter in 2019 detailed the expensive purchase after a source told him that he believed the boat was obtained with funds from the campaign. The reporter, Grant Stern, was threatened with a lawsuit at the time for the story.

Old tweets from Kolfage in which he promised never to spend any of the campaign’s money also began spreading online.

Not only that, Kolfage called reports from BuzzFeed News in 2019 that he was under criminal investigation for the campaign “fake news” as well.

“Ugh oh fake news @buzzfeed is at it again!” he tweeted. “Just like we embarrassed you last time we’ll do it again! Remember you can’t stop us, no one can! Get ready for wall #2.”

The men involved in the purported scam could face up to 20 years for each charge.