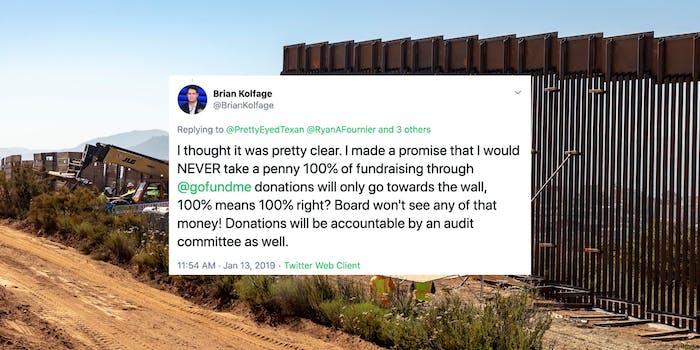 Brian Kolfage, one of several men arrested on Thursday for defrauding donors with the “We Build the Wall” online crowdfunding campaign, called reports of a criminal investigation into his actions last year “fake news.”

Responding to a BuzzFeed News article on the investigation, Kolfage denied that his efforts to privately fund a wall on the southern border had caught the attention of law enforcement.

Prosecutors say the group, which managed to raise $25 million, “orchestrated a scheme to defraud hundreds of thousands of donors.”

Kolfage is said to have pocketed more than $350,000 of the fund, which had allegedly been funneled into a non-profit and a shell corporation, while Bannon is accused of taking over $1 million.

Ironically, Kolfage also promised to “NEVER take a penny” from the fund in a tweet from early 2019.

Kolfage is accused of using the funds to purchase cosmetic surgery, jewelry, an SUV, and a golf cart. The veteran is also said to have used the money to make payments on a boat, pay off credit card debt, make personal tax payments, and pay for home renovations.

For many, the group’s GoFundMe border wall project looked like a scam from the beginning.

In December 2018 when the campaign had amassed over $4 million, one editor presciently suggested that the fiasco would lead to jail sentences.

“This almost certainly ends with some dumbfuck (or group of dumbfucks) going to jail,” Crooked Media’s Brian Beutler said.

Although President Donald Trump initially appeared on board with the project, he later pushed back against the effort in a tweet last month.

“I disagreed with doing this very small (tiny) section of wall, in a tricky area, by a private group which raised money by ads,” he said. “It was only done to make me look bad, and perhaps it now doesn’t even work. Should have been built like rest of Wall, 500 plus miles.”

It’s unclear whether Trump had learned of the criminal investigation prior to denouncing their campaign.

If convicted, the four men could face up to 20 years in prison for each charge.