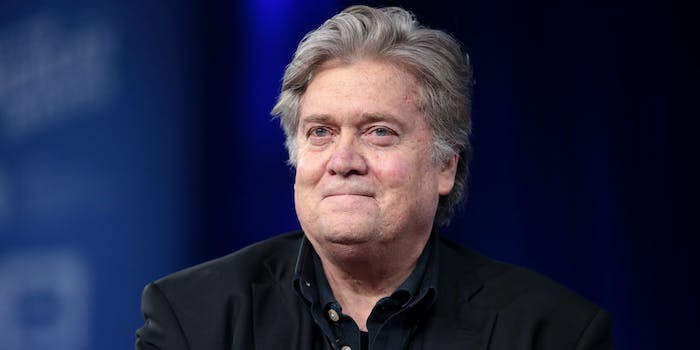 Bannon and others were charged by federal prosecutors.

Steve Bannon, the former White House adviser, is among a group of people who have been charged with allegedly defrauding people who donated to a “We Build the Wall” online crowdfunding campaign, authorities announced on Thursday.

Federal prosecutors allege that Bannon and the three men “orchestrated a scheme to defraud hundreds of thousands of donors” through a “We Build the Wall” crowdfunding campaign that raised $25 million.

The “We Build the Wall” campaign was started by Kolfage, a decorated veteran, on GoFundMe and went viral in 2018.

The four men claimed the money would not be used to compensate them, but instead funneled it for personal use, the U.S. Attorney’s Office alleges. The money from “We Build the Wall” was put into a non-profit and shell corporation to try and conceal its use, authorities said.

Federal prosecutors allege that Kolfage took more than $350,000 in funds from the campaign to spend on personal use. Meanwhile, Bannon received more than $1 million from We Build the Wall which he used to “secretly pay” Kolfage and cover personal expenses, according to authorities.

The charges for Bannon, Kolfage, Badolato, and Shea each carry a maximum of 20 years in prison, authorities said.

According to reports, Bannon is currently in custody.

“The defendants allegedly engaged in fraud when they misrepresented the true use of donated funds,” Inspector-in-Charge Philip R. Bartlett said in a statement. “As alleged, not only did they lie to donors, they schemed to hide their misappropriation of funds by creating sham invoices and accounts to launder donations and cover up their crimes, showing no regard for the law or the truth.”