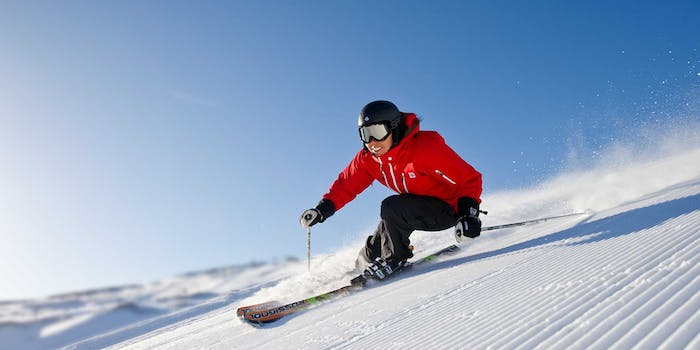 'We did not know at that stage what will be doable and whether the technology would be ready. Fortunately it was.'

When people talk about realism in video games they usually focus on graphics—how accurate something looks, how capably it’s been rendered digitally. And it doesn’t get much more real than two virtual skiers wearing Oculus Rift headsets as their ski goggles, racing in real time against someone skiing in real life.

Digest that for a moment: Two people skiing in virtually reality raced someone doing it in real life. At the same time.

Organized by the 3D Live project and broadcast during the Wearable Technologies Conference in Munich, the race pitted three opponents, all located in different countries, against one another in a series of races. Vegard Engen—referred to as Dr. V—lined up at the World Cup ski course in Schladming, Austria, while competitors Alex (no last name) and Ben Poussard competed from the comforts of the indoors in Greece and Germany, respectively.

Despite the distance between them, the racers were able to tackle the same slopes thanks to the 3D Live Project’s configuration.

Poussard, one of the research engineers behind the project, took part from Germany using a fairly low-tech set up. He completed his simulated skiing atop a Wii Fit board with a Kinect sensor in front of him, with everything running off a basic laptop.

“Since Norwegians apparently are born with skis on their feet, they figured I’d be up for the challenge.”

Alex in Greece raced from the Information Technologies Institute using a more advanced setup that consisted of four Kinects and was reconstructed in full 3D within the game engine.

The key, Poussard explains, is making the equipment as accessible as possible. “We have plenty of modules that are optional,” he told the Daily Dot. “The thing that makes the difference is that we don’t care about the platform running the game. Smartphones, Windows, or MacOS machines. It is all compatible!”

Engen, who became involved in the race as part of the IT Innovation Centre at the University of Southampton, braced the real slopes with a pair of goggles that featured a virtual heads-up display. “Since Norwegians apparently are born with skis on their feet, they figured I’d be up for the challenge,” he told the Daily Dot. His goggles were connected to a smartphone app which transferred the data between all the racers in real time and showed Engen his virtual opponents as if they were actually on the slope.

“For the smartphone app, the game is actually running on the smartphone which is paired to the smart goggles,” Poussard explains. “The smart goggles then display what the game wants it to display: The virtual 3D environment, ski slope with contextualized information, the avatars of the other players, their performances. It is not augmented reality, nor virtual reality. It is definitely something new outside.”

The race had been in the works since June of 2014, but the technology used was the culmination of two and a half years of research. “We did not know at that stage what will be doable and whether the technology would be ready. Fortunately it was,” Poussard says. After technical tests and user trials with professional skiers in January 2015, the team was able to organize the race to take place during the two day Wearable Technologies show.

Despite Engen picking up an early win for team real life, the VR racers managed to get the hang of the pixelated powder over time. After three races, Alex and his 3D environment had a sizable lead and won the final race to finish with the best overall time. Poussard secured second while Engen finished third in the final race and overall.

Of course, the results are a little like saying the person who masters Guitar Hero is a better actual guitarist than a professional musician. Engen faced considerably more adverse conditions, making his trip down a real mountain populated by other skiers and natural obstacles.

He also had to be concerned for his own safety. “While skiing, I’m so focused on what I’m doing and don’t look much at the display except for a quick glance to check how I’m doing in the race now and then,” Engen says. The virtual skiers may feel a simulated thrill going 60 miles per hour, but there’s nothing to recreate the feeling of hitting the ground at that speed.

Engen said that safety was factored in by the 3D Live team when they designed the display. The goggles contained a built-in safety mechanism that would disable the digital overlay when exceeding a certain speed. “The slopes can be busy, so it’s important to be able to focus on the real people in front of you and not the virtual ones in the game,” explains Engen.

But for the Poussards, a race is still a race. The 3D Live project just makes it possible for everyone to compete where they’re most comfortable. “Sportsmen are outside, gamers are inside, and we don’t care! We are in a race, and we just want to hurtle down the slope to win.”

Poussard had a chance to experience both views of the race during the testing process and told us, “Skiing with this new kind of system was really cool. It makes you want to give it all to be the first at the finish line. I was amazed by the added value this Heads Up Display can provide.” But, he said, “Skiing in the VR system was fantastic, and even more fantastic as I know the real slope. When you wear a VR mask in this kind of environment, you feel there, right on the slope.”

Engen enjoyed the competition as well, calling it a great “social and exciting” experience. He noted that for him, the auditory connection to his rivals was just as important to merging the real and digital worlds as the visuals. “I think the audio aspects are really important too, hearing and talking with the other skiers. It does feel like you are skiing with somebody else even though they are joining in a virtual world.”

3D Live has ambitions to continue to build out its platform for augmented sports. The team behind the project are using the 3D reconstruction technology utilized during the ski race to allow competitors to connect real and virtual partners for other events including jogging and golf.