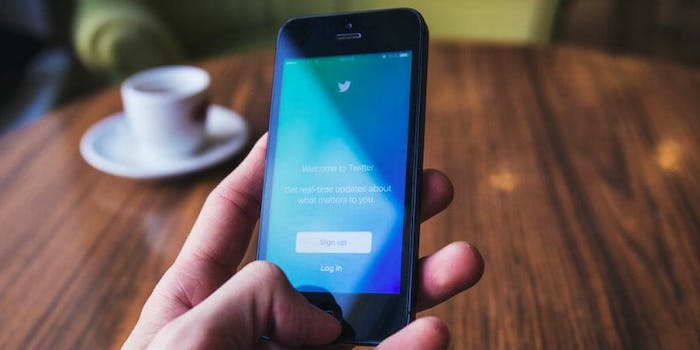 The platform is, however, 'ranking' tweets based on a variety of factors.

They call liberals “snowflakes,” but conservatives have proven incredibly sensitive over the idea that their ideas may be censored by Silicon Valley tech companies. Their latest accusation: that Twitter has been shadowbanning conservative leaders’ accounts.

President Donald Trump tweeted about the idea on Thursday morning, instigating mass outcry over the practice. The only problem: It seems that many of the people angry about the idea of conservatives being shadowbanned have no actual idea what shadowbanning is.

Twitter published a blog post on Thursday explaining what shadowbanning is and asserting the social network does not employ the practice. While it seems the meaning of the word has shifted over time, Twitter defines it as “deliberately making someone’s content undiscoverable to everyone except the person who posted it, unbeknownst to the original poster.”

The social media platform maintains that while it does not shadowban, it does rank tweets and search results. The algorithms Twitter uses in this ranking take into account timeliness, relevance, and whether the source is a “bad-faith actor” trying to poison healthy Twitter conversation. For a higher ranking, the social network also considers whether tweets come from someone you’re interested in (that you follow or have interacted with in the past) and the popularity of the tweet (more popular tweets will rank higher than less popular ones).

Vijaya Gadde, who leads Twitter on safety and legal policies, tweeted that Twitter aims to “serve the public conversation.”

Twitter exists to serve the public conversation, enabling important discussions around the world to occur. Favoring one specific ideology or belief goes against everything we stand for. https://t.co/lioupj3aUF

As Twitter has been trying to clean up its social network of spam, bots, and trolls, some have attacked the social network for biases against conservative views. When Twitter purged a number of bots in February, conservative Twitter users complained that the social network was unjustly banning accounts that agreed with their viewpoints. Earlier this week, it appeared Twitter had begun acting on its promises to clean up its platform, as some known, mostly alt-right trolls were buried in search results.

Accusations of shadowbanning cropped up earlier this week when users noticed that conservative Congress member Rep. Matt Gaetz (R-Fla.) wasn’t showing up in Twitter’s search features. Gaetz, in particular, has a history of disseminating conspiracy theories in online posts.