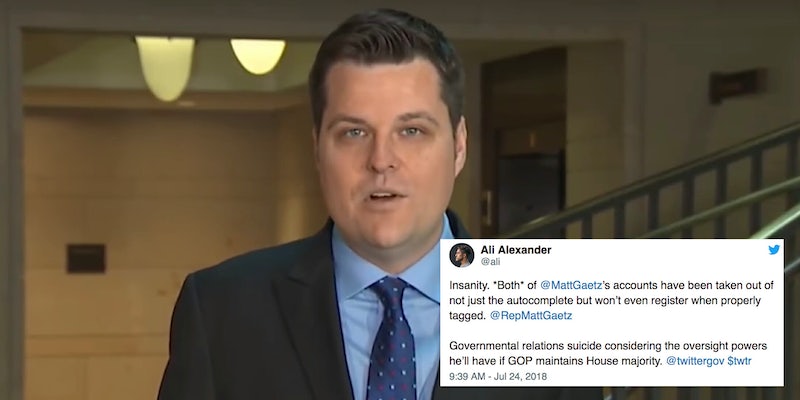 Neither of the congressman's accounts appear in the 'search all' dropdown results.

Rep. Matt Gaetz (R-Fla.) may be the first congressman to fall victim to Twitter’s latest plan to manage “troll-like” behavior on its platform. Users found that neither his personal nor official accounts were appearing in the “search all” function’s dropdown results.

The issue was first discovered by user Ali Alexander, who tweeted screenshots of his attempts to search for the Republican lawmaker via the Twitter mobile application.

A discussion ensued beneath Alexander’s thread, with many other users posting similar screenshots claiming to have had the same experience.

Same, doesn’t show up on mine either

Other users claimed to have found his accounts easily and dismissed the initial tweets as a right-wing conspiracy. One individual, who appeared to be logged in via a desktop, posted proof that a search had turned up both the congressman’s accounts.

Corroborating the claims of Alexander, however, several Daily Dot staffers found that searches for “rep matt gaetz” and “matt gaetz” on the Twitter mobile app and desktop failed to turn up the accounts via the search-assisting drop down of suggestions.

A search for “daily dot,” on the other hand, turned up a list of suggested accounts.

New ranking behavior and search algorithms are thought to be part of Twitter’s overall plan, announced in May, to tackle “troll-like behavior” on the platform. The changes were recently investigated by Gizmodo, which reported that several prominent far-right accounts were being demoted or removed from search results and that “Twitter seems to intend to reduce the ease with which these personalities can grow their followings.”

Interestingly, Gizmodo found that “Search all” on desktop and a search using the “People” tab, on either desktop or mobile, occasionally turned up the expected results. This might help explain why Gaetz’s accounts appeared for some user and not others.

The discovery of search results for Gaetz’ accounts has underlined for some conservatives the theory that Twitter is actively conspiring to target and censor right-wing voices and users. It’s unclear exactly how Twitter is deciding which accounts are dropped from search results.

As a House member, Gaetz’s Twitter account should be visible for his constituents to connect with him.

But he has used his account to push appearances on InfoWars, the notorious fake news site, and promote what some would consider alt-right conspiracy theories, once saying there was a secret cabal within the FBI working to take down President Donald Trump.

Update 8:30am CT, July 25: In a response to the Daily Dot, Twitter said that Gaetz and others not appearing in search was something they were aware of, and working to correct.

“As we have said before, we do not shadowban. We are aware that some accounts are not automatically populating in our search box, and shipping a change to address this,” said a Twitter spokesperson. “The profiles, Tweets and discussions about these accounts do appear when you search for them.”

Editor’s note: This article has been updated