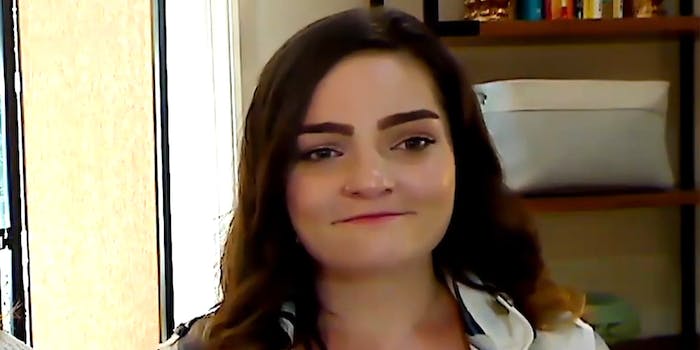 At Facebook’s annual shareholders meeting on Wednesday, sex trafficking survivor Sarah Cooper asked the company to study sex trafficking on the site before it adds additional end-to-end encryption to its messaging services.

Shareholder Proposition 6, which Cooper spoke in favor of, was proposed by a group including her mother. Facebook management urged shareholders to vote against it.

Facebook’s WhatsApp already has the technology, and Messenger has an option to send encrypted messages. Numerous other messaging apps also offer end-to-end encryption.

Sex trafficking survivors, law enforcement, the federal government, and lawmakers have all pushed against encryption. They argue that it endangers more people by making it harder to investigate sex crimes, such as child pornography and human trafficking. They are opposed by privacy advocates in what has become a tug-of-war over security and privacy on the internet.

Cooper met her trafficker on Facebook when she was 15 years old. He groomed her for years, convincing her to send him sexually explicit photos and becoming a close confidant, she said in a release.

After she turned 18, the two met in person for the first time. The man, who was far older than she’d been led to believe—closer to 40 than her own age—took her to a house where she was given drugs and alcohol and forced to have sex with him and another woman on camera, Cooper told the Boston Globe. They told her it was an audition, she said.

The following day, he took her to New York, where she was forced into prostitution and held as a sex slave for 10 days, the Globe reports.

“I was trapped in a motel room that was guarded by armed men,” Cooper said in a release. “I was sold into sex slavery. When I asked where all the money was going or begged to leave, they gave me alcohol and drugs. “

On the tenth day, she managed to get a message to a friend, who then rescued her.

Now Cooper fears that end-to-end encryption will lead to more people being preyed upon on Facebook like she was.

She and others asked Facebook to study its role in child sex abuse. Cooper told the shareholders that she also wants the company to improve its age verification and increase human monitoring of content.

“It should absolutely delay expanding encryption on its platform until it can protect children,” she said.

Governments in the United States and the United Kingdom and elsewhere share her concerns.

“The offending will continue, the images of children being abused will proliferate—but the company intends to blind itself to this problem through end-to-end encryption which prevents all access to messaging content,” Patel said.

On the other side of the argument, some fear that the lack of encryption, or adding a back door for government agencies or tech companies puts innocent people at risk of privacy violations. Others also argue that encryption protects journalists and those who criticize the government, both in the U.S. and abroad.

“We are being spied upon by everybody and everywhere,” Susan Landau, a Tufts University computer security professor, told the New York Times in a 2019 story about the Justice Department pushing for access to encrypted messages.

“It is very easy to listen in on communications. Securing data is a clear national security interest.”

As a survivor and an advocate, Sarah Cooper concedes that privacy is important, but she feels that it’s more important to protect children and other potential victims who may be exploited on Facebook.

“Facebook is a great platform, but it is not a safe platform,” she told shareholders today.

“With encryption it will become one of the world’s most dangerous platforms for children.”