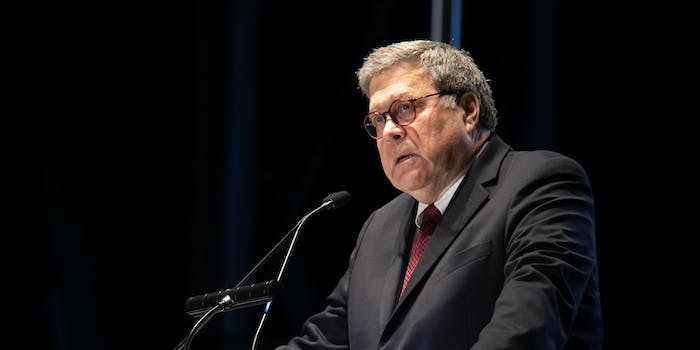 The Justice Department continued its long-standing attack on encryption this week by signing onto a statement with six other countries calling for law enforcement to have easier access to encrypted data.

This is nothing new for the Justice Department, which has long argued for—and supported Republican bills—that call for tech companies to add backdoors to encrypted data.

The Justice Department has argued that encryption hinders investigations, while tech and privacy advocates have pointed out that backdoors into encryption would make it easier for bad actors to co-opt them and have access to sensitive information.

Perhaps the most public spats between the U.S. government and tech companies over encryption has been the Justice Department asking Apple for access to iPhones used by the San Bernandino and Penscaola shooters.

In response, Apple said Wray and Barr’s remarks were “an excuse to weaken encryption.”

The statement from the countries asks the tech industry to address “serious concerns” they have and work to help law enforcement have access to encrypted data.

It further cements the Justice Department’s stance that encrypted data should be made easier for it to access. It asks for the tech industry to help with investigations, let them access encrypted data in “readable and useable” formats, and work with governments to “facilitate legal access in a way that is substantive and genuinely influences design decisions.”

“While this statement focuses on the challenges posed by end-to-end encryption, that commitment applies across the range of encrypted services available, including device encryption, custom encrypted applications and encryption across integrated platforms,” the statement reads, adding: “We challenge the assertion that public safety cannot be protected without compromising privacy or cybersecurity. We strongly believe that approaches protecting each of these important values are possible and strive to work with industry to collaborate on mutually agreeable solutions.”