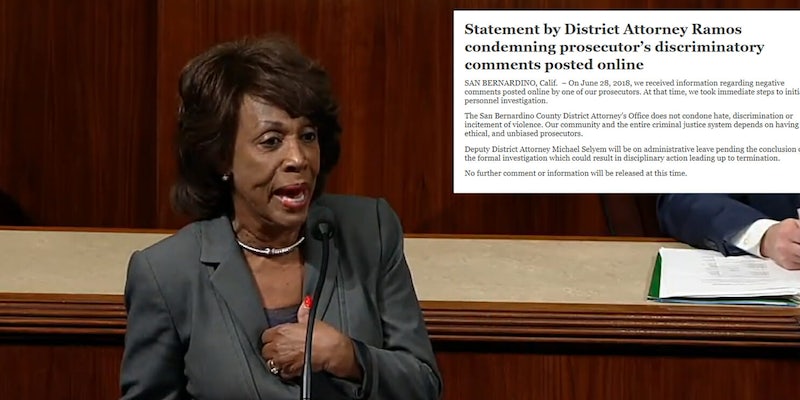 The comments are highly offensive.

Michael Selyem, a deputy district attorney in California, has been placed on administrative leave after the discovery of offensive comments he left on social media about Rep. Maxine Waters (D-Calif.) and others.

Selyem, who is in charge of prosecuting gang activity, posted the comments on Facebook and Instagram, the San Bernardino Sun reports.

Selyem called Waters a “loud-mouthed cunt,” and added that “you would think someone would have shot this bitch by now…,” the Sun reports.

The comment was left after Waters encouraged her supporters to confront members of President Donald Trump’s administration in public—remarks that caused intense backlash among conservatives online and led to the lawmaker receiving death threats.

In another post under a Brietbart article on Facebook, the prosecutor said he was in favor of “white males” immigrating into the United States, but not “terrorist assholes.”

The office said Seylem could face termination as a result of the investigation.

“The San Bernardino County District Attorney’s Office does not condone hate, discrimination or incitement of violence. Our community and the entire criminal justice system depends on having fair, ethical, and unbiased prosecutors,” the office wrote in the statement.

Michael Ramos, the San Bernardino County District Attorney’s Office, told the Washington Post he was concerned that Seylem’s past cases could be challenged, but added that there wasn’t evidence bias was involved with his work.

You can read all of the San Bernardino Sun‘s report here.