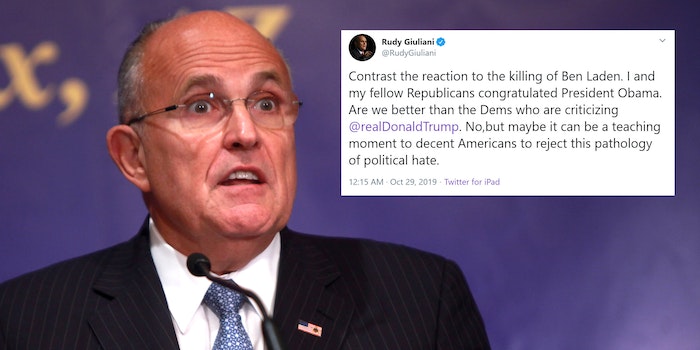 We regret to inform you that Rudy Giuliani, who is way too online for someone in both his position and of his age, is online again.

In the wake of President Donald Trump’s announcement that he’d killed ISIS leader Abu Bakr al-Baghdadi in a raid in Syria, a number of conservatives were upset that the president didn’t receive universal praise.

Indeed, that night, Trump was booed at a Washington Nationals game, not more than 12 hours after he announced the death of al-Baghdadi.

And Giuliani, Trump’s personal lawyer, wanted to contrast it with how Republicans responded to the killing of the notorious perpetrator of the 9/11 attack, “Ben Laden.”

“Contrast the reaction to the killing of Ben Laden. I and my fellow Republicans congratulated President Obama. Are we better than the Dems who are criticizing  @realDonaldTrump. No,but maybe it can be a teaching moment to decent Americans to reject this pathology of political hate,” Giuliani tweeted.

Not too many people were familiar with Ben Laden.

Why did President Obama kill Ben Laden? Who is he? Where did he live? What did he do? Surely, this is the biggest scandal and hidden secret of his entire presidency. https://t.co/e42YQkeNn6

Larry David: “You calling him Ben Ladin or Bin Laden? Ben, that’s almost like a Jewish name … Ben Laden, that sounds like a shirt maker in Manhattan" https://t.co/2DmHZIOy7k pic.twitter.com/hfYFdDcTce

Apparently, this is an entire Curb Your Enthusiasm bit.

Giuliani can be forgiven a late-night typo. But what Giuliani is missing is that while Republicans did praise Obama for the raid that killed Ben, Trump himself pointedly and repeatedly refused to profer praise on the president then.

So you can see why maybe people don’t feel inclined to pat him on the back.