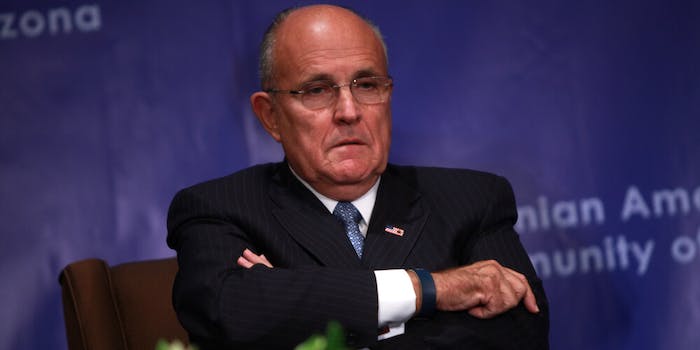 'What’s the odds that you butt-dial a reporter while planning the next evil plot?'

According to NBC News, the call came in around 11pm while the reporter was sleeping. Giuliani had spoken to the reporter who received the call earlier that day, so the number must’ve been in the recent call logs and easy for his butt to get to. The voicemail that resulted wasn’t heard until the next morning.

The conversation happened between Giuliani and an unidentified man.

“Tomorrow, I’ve got to get you on Bahrain. You’ve got to call,” Giuliani tells the man in the voicemail posted by NBC.
“The problem is we need some money,” Giuliani later says when referencing a “Robert” who the unidentified associate said was in Turkey. After a bit of a long pause, Giuliani adds, “We need a few hundred thousand.”
Giuliani runs in some important circles in Bahrain, and his law firm has even represented the country in financial deals.
The voicemail ends with the pair discussing the money and the other man recorded in the conversation does the majority of the talking. His voice is far away and muffled, so it is difficult to decipher what exactly he says, and no one knows for certain what they are talking about.
Still, people on Twitter are having a field day with Giuliani’s butt-dial voicemail, leading the hashtag #buttdial to trend.

The best thing about #buttdial will be the serious, smartly dressed news anchors saying "butt dial."

Kind of bummed that I'll be dead in 50 years when kids get to study the great butt dial debacle of 2019 in their history classes. #ButtDial #Giuliani #rudygiulianimeltdown #ButtHisVoicemails #HowIsThisReality

Others pointed out that out of all the people Giuliani could have butt-dialed, he happened to butt-dial a reporter.

“What’s the odds that you butt-dial a reporter while planning the next evil plot? This right out of Austin Powers,” Twitter user @manniKraemer joked.

What’s the odds that you butt-dial a reporter while planning the next evil plot? This right out of Austin Powers. #buttdial

Welp, I guess that fills another square on my BatShit Crazy Bingo card. #ButtDial #BatShitCrazyBingo pic.twitter.com/9jyRUqZUBL

Reader’s Digest writer Giacomo Calabria referenced the pseudonym given to the informant who relayed the information that broke the Watergate scandal.

This isn’t the first time Giuliani’s butt has mistakenly called an NBC reporter and left a voicemail. Back in September, the former mayor of New York mistakenly left another voicemail, wherein he went on a long diatribe against the Bidens.

“I expected it would happen,” Giuliani says at the start of the recording, referring to going public against presidential candidate Joe Biden and his family. “The minute you touch on one of the protected people, they go crazy. They come after you.”

“You got the truth on your side,” the other man on the recording, who remains unidentified, says.

For the rest of the three-minute voicemail, Giuliani rails against Biden’s son Hunter, claiming he does shady business and has a drug problem.

“When he became vice president, the kid decided to go around the world and say, ‘Hire me because I’m Joe Biden’s son.’ And most people wouldn’t hire him because he had a drug problem,” he was recorded saying.

Evidently, Giuliani is in serious need of a tutorial on lock screens.