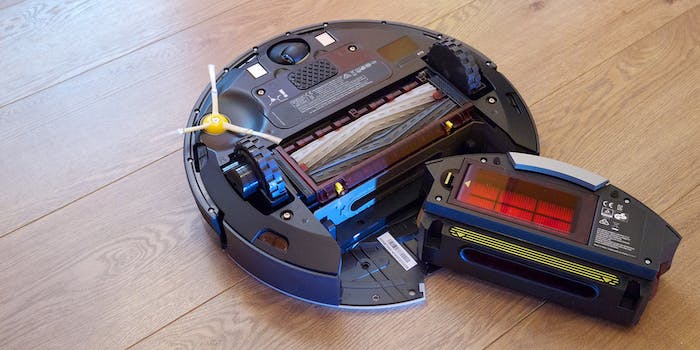 How the Roomba sparked a hacking revolution

For over a decade, Roombas have been the original DIY-friendly robot.

It looks innocent enough—a circular disk that hums around, picking up dirt and dust on your living room floor. It’s an iconic, boring slice of Americana at this point.

But it’s not just a smart vacuum cleaner: The Roomba is one of the most popular robots for do-it-yourself hacking and tinkering. In fact iRobot, creators of the Roomba, released the Create 2 just for that purpose: It’s a hackable version of the robot that’s used for research, science, and technology education.

Roomba’s launch in 2002 was the first time connected devices entered the home, a landmark experience to be sure. It ushered in a greater understanding of how robots would ultimately overtake our homes; through its simplistic design, the device got people accustomed to letting robots do the work.

Ever since, the little robot has experienced its fair share of fame—from viral cat videos to a longstanding joke on the hit show Parks and Recreation (DJ Roomba, for the uninitiated). Along the way hackers slowly began using the Roomba to tinker with side-projects, both manipulating and controlling the device itself through sensors, the device’s circuit board, and through third-party devices like Nintendo’s Wii-mote. A handful of Roombas were even programmed to turn into a Pac-Man game come to life.

But what makes the Roomba so appealing to hackers? Why control a bot that was meant to clean up hair and dirt? Well for starters, the company encourages hardware hackers to use the Roombas for experimenting, and ships each Roomba with a serial port—an external connection to a computer that transmits bits of data—with an application programming interface.

“IRobot was founded by passionate roboticists who are hackers at heart,” Colin Angle, iRobot CEO, told the Daily Dot via email. “They understand better than anyone the infatuation with hacking and programming existing software. Given the fact that Roomba has proven to be a very useful, durable and dependable platform, many have found it ideal to leverage for research purposes. It was designed that way.”

It’s the robot’s three-tiered interface that lets hackers change how much the robot controls itself.

There are hundreds of resources for reprogramming the device, including Hacking Roomba, a comprehensive book and website published in 2007 dedicated to teaching people how to turn their vacuum into a robot that sings, paints, and acts as a Wi-Fi hotspot, among a number of other hacks. There’s a subreddit where people meet to discuss hacks and Roomba fails. And the company also provides its own documentation that explains how to override the existing controls and create custom applications for it.

Roomba’s code is written in JavaScript, an accessible programming language of HTML and the Web, and runs in Node.js, an open-source JavaScript platform. And since there’s a Node.js library for the Roomba, it’s easy to get started if you already have some coding knowledge. Once you’ve decided to hack your vacuum, you’ll join a growing number of makers eager to help find the next out-of-character Roomba quirk.

The possibilities run the gamut, from the totally ordinary to the seemingly unimaginable. Edging toward the latter, software engineer Martin Atkins is turning a Roomba he found on Craigslist into a telepresence robot that lets people control the device from the comfort of their own home.

“Just as with Arduino and Raspberry Pi, joining an existing community is great to get started because there are loads of other people out there who have already solved problems in different ways and lots of existing projects to draw inspiration from,” Atkins said, referring to the open-source electronics platforms popular among makers for prototyping hardware. “For our telepresence robot project, we found lots of other folks who had built similar things and drew a little inspiration from each of them, making our platform largely a hybrid of our favorite parts from other people’s designs.”

Atkins and his colleagues wanted a telepresence robot for members of their office’s remote team who could only be reached via meeting rooms. So Atkins decided to mount a laptop on a Roomba, and while Google Hangouts ran, attendees could be a part of group meetings. By pairing the computer with a Node.js application that can monitor and execute requests to control the robot via a REST API, people in the hangout can move the robot forward and roll around the office. It sounds more complex than it is:

Beyond the community and relatively straightforward tutorials and programming required to build different apps and features for the Roomba, Atkins said it’s the robot’s three-tiered interface that lets hackers change how much the robot controls itself that attracted him.

Passive Mode, Safe Mode, and Full Mode are already built into the Roomba. Passive Mode is the most limited, with only the default settings in place, and provides programmers with limited control over what the bot actually does. In Safe Mode, the robot’s sensors can detect cliffs or elevation changes and will stop moving to make sure it doesn’t topple over. Full Mode turns off those safety mechanisms and lets you have full control over the motors and sensors.

“This progression made it really easy for me to get started and see a result,” he said. “The telepresence robot project is using ‘Safe Mode’ as a failsafe against a remote person accidentally driving the robot down a staircase.”

Recognizing the potential for the Roomba to become a hacker’s top choice for tinkering, in 2007 iRobot released its first version of the Create line. Create 2 is the company’s latest programmable robot. It launched in December and is a refurbished version of the original Roombas—though without the ability to clean anything.

“Most hackers want a project that they can get working on quickly,” Angle said. “Create 2 is provides a ready-made platform that is backed by more than 12 years of Roomba development and more than 12 million robots sold.”

In terms of the cool factor of futuristic technology, Roomba is hardly on the same level as Boston Dynamics’ frighteningly realistic robotic dogs. But Roomba’s charm and top spot as the best robot for garage adventurers has lasted for more than a decade thanks to open resources and continued community growth.

As more people learn to code, and programming becomes an increasingly interesting option for young students and late-in-life learners alike, the Roomba will continue to be more than a vacuum. And thanks to open software and basic programming, the Roomba revolution continues apace as hackers turn a cleaning product into a platform for ushering in the robots of the future.