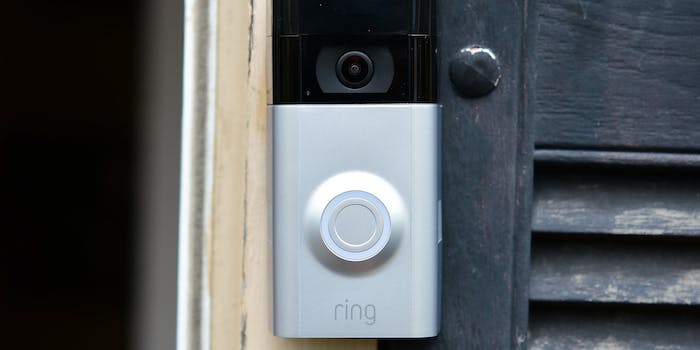 The security company is facing criticism once again for its police partnerships.

While many tech companies are distancing themselves from their relationships with police following weeks of protests, a new report is shedding light on ties between Ring and law enforcement.

The report comes as a member of Congress is also renewing calls for transparency from Amazon, Ring’s parent company, about this controversial relationships with police departments.

The Electronic Frontier Foundation (EFF) published an analysis of Ring’s data, identifying more than 1,400 agencies that have partnered with the security camera company.

Officers in these partner departments have the ability to request footage directly from users without needing a warrant through an accompanying Neighbors portal. According to EFF’s report, police have requested footage from users more than 5,000 times in the first three months of 2020.

The EFF also alleged that “roughly half” of these departments “have been responsible for at least one fatal encounter in the last five years.”

“Concerns about police violence must be tied to concerns about growing police surveillance and the lack of accountability that comes with it,” wrote Digital and Campaign Strategist Jason Kelley.

The EFF launched a petition earlier this month demanding an end to this program, joining a chorus of digital rights and civil rights organizations critical of the program.

Meanwhile, Rep. Raja Krishnamoorthi (D-Ill.), chairman of the House Oversight Committee’s Economic and Consumer Policy subcommittee, sent Amazon a letter asking whether Ring would abide to a moratorium the retail giant announced about police use of its facial recognition technology.

Ring does not currently offer facial recognition, Amazon has a product, Rekognition, that is used by police.

Krishnamoorthi also said Amazon’s statement in support of Black Americans in the wake of protests against police brutality and racism “is undermined by Ring’s continuing partnerships with law enforcement.”

“As demonstrations occur across the country, more and more people are confronting the reality of racial injustice in policing,” Rep. Krishnamoorthi stated. “No one can still claim ignorance of the fact that interactions with police are more dangerous for people of color, and police surveillance leads to more of these interactions.”

The congressman reiterated his previous request for information and policy clarification from the company about the police partnerships. The Congressman also highlighted reports showing how people of color were more likely to be profiled in the Neighbors app

“Unfortunately, if acceptable solutions are not presented, it may be necessary for Ring to heed calls to end its partnerships with police and retire its Neighbors App,” Krishnamoorthi wrote.