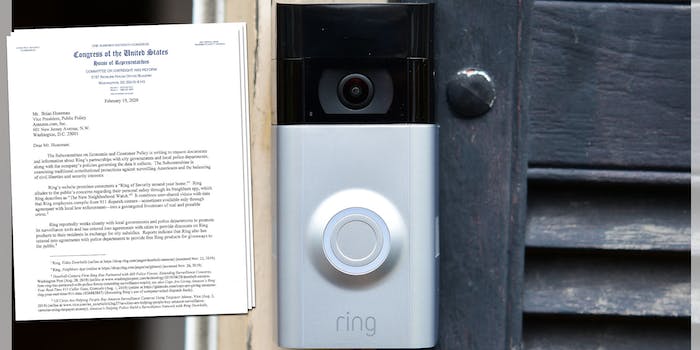 A lawmaker wants to know more about Ring and its agreements with law enforcement.

Lawmakers in the House of Representatives recently sent a letter to Amazon asking for more information about Ring’s relationship with law enforcement agencies—partnerships that have been criticized in recent months.

Rep. Raja Krishnamoorthi (D-Ill.), the chairman of the House Oversight Committee’s Economic and Consumer Policy subcommittee, wrote a letter to Amazon on Wednesday asking for a list of partnerships Ring has with cities and law enforcement.

He also highlighted the vague language in the company’s terms of service surrounding handing information over to law enforcement agencies.

The company’s work with law enforcement has been criticized for months, as a series of cameras capturing unwitting people that can be perused by law enforcement raises civil rights concerns. Ring users have the option to share information with police through a portal.

“The Subcommittee is seeking more information regarding why cities and law enforcement agencies enter into these agreements,” Krishnamoorthi wrote in the letter. “The answer appears to be that Ring gives them access to a much wider system of surveillance than they could build themselves, and Ring allows law enforcement access to a network of surveillance cameras on private property without the expense to taxpayers of having to purchase, install, and monitor those cameras.”

Krishnamoorthi also notes in the letter that Ring has said that it only turns over customer information if its required to do so legally, however its terms of service say it can turn over information in response to a “reasonable governmental request,” which isn’t clearly defined by Ring.

The Illinois lawmaker asked Amazon to give him a list of cities and law enforcement agencies that have entered into an agreement with Ring; have access to the portal where users can share information with them; and any documents about potentially integrating Amazon’s facial recognition software into Ring products, among other things.

This isn’t the first time Ring’s relationship with law enforcement has faced scrutiny from Congress.

Last year, Sen. Edward Markey (D-Mass.) released answers he received from Amazon about the situation, in which Amazon said it does not require law enforcement to delete materials shared by users after a certain period of time, among other things.

Markey said at the time that Ring’s policies “are an open door for privacy and civil liberty violations.”

“If you’re an adult walking your dog or a child playing on the sidewalk, you shouldn’t have to worry that Ring’s products are amassing footage of you and that law enforcement may hold that footage indefinitely or share that footage with any third parties,” the Massachusetts senator said at the time.