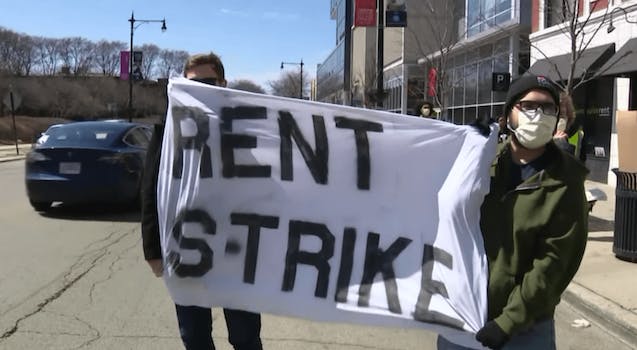 Everything you need to know about Rent Strike 2020

Coronavirus is proving more than just a public health crisis as the economy comes to a screeching stop.

Stay-at-home orders are continuing throughout April and many people face this month’s bills without a source of income.

Almost 17 million Americans filed for unemployment over the past three weeks. And the question lingers: How are they supposed to pay?

While some states have temporarily banned evictions, a movement of tenants has garnered nationwide support for a rent strike.

Under Rent Strike 2020, participating renters made it clear that landlords should either forgive the following two months of rent or tenants simply wouldn’t pay it.

A National Multifamily Housing Council (NMHC) report says that 31% of American renters did not pay rent on April 1.

Some congressmen and women are behind policies of rent forgiveness, like Rep. Ilhan Omar (D-Minn.).

“We need to cancel rent until this crisis is over,” she tweeted on Wednesday.

Rep. Alexandria Ocasio-Cortez (D-NY.) also stood in solidarity for the strike by encouraging tenants to organize on Instagram Live. It sent chills down the spines of capitalism fanatics.

“Here’s AOC encouraging her followers to engage in ‘organized rent strikes’ because capitalism is to blame for people making money off of ‘just owning property,'” GOP strategist Caleb Hull tweeted.

The tension between landlords and tenants is reaching its breaking point. One outcome considers rent forgiveness while another threatens homelessness.

A third option relies on government support to both sides.

Until then, here’s everything you need to know about possible rent strikes.

Rent Strike 2020 is the major organizer for tenants protesting rent payments. According to their website, they represent 1.5 million people who are threatened financially by COVID-19.

But it could be way more than that. Forty million people live in rental units across the U.S., in addition to all the small and large businesses located in rental properties. As nonessential businesses remain closed, every American is impacted by the receding economy.

In addition, the number of unemployment claims filed climbs by the million each week. For that reason, Rent Strike 2020 demands a rent pause, including utilities, for April and May to alleviate expenses for the unemployed.

“Every governor, in every state, must do what is necessary to ensure a 2-month freeze on the payment of rent, residential mortgages, and utility bills (including sanitation, power, water, gas, & internet services),” the organization posted on their website, “to allow working families to do what is necessary to prepare for the difficult social measures required to flatten the outbreak curve.”

Twitter has been home base for the national movement. The official page for Rent Strike 2020 has been posting memes to garner support for the strike.

“ATTN AK Twitter: if your landlord tries to evict you or hassles you for nonpayment of rent this month or next month, I will represent you pro Bono. For real. Dm me. #RentStrike” one person offered in a tweet.

And it’s not just one organization. Other groups are popping up to help specific demographics like students.

Rent Strike 2020 was unable to respond to comment by time of publication.

It should be noted there’s confusion among the terms. While many say “freeze” to calling for a stop on payment, a rent freeze technically means landlords can not raise rents. It would still require tenants to pay.

What protesters on Twitter, however, are calling for, regardless of the term they use, is best known as rent forgiveness. It would simply wipe the bill from tenant’s expenses.

Could the government support a rent strike?

Not directly. But, there are some efforts to help alleviate pressure on tenants.

In March, the federal government passed the $2.2 trillion CARES Act in an attempt to relieve some of the economic distress.

For renters, about $12 billion of it was set aside for public housing-related efforts. Many renters, in public or private properties, could qualify for the around $1,200 stimulus checks.

In addition, the CARES Act prevents evictions on federally-owned housing for a 60-day period starting on April 2. The federal government owns 28% (12.3 million) of U.S. rental units.

But, many state governors say it is not enough. Just in New York City alone, tenants make up $1 billion of the city’s public housing budget, according to the New York City Housing Authority (NYCHA).

“We are grateful that the stimulus package includes funding for public housing but it is not nearly enough,” a spokesperson for NYCHA told the Daily Dot. “We are hopeful that further funding will include a larger allocation to public housing.”

In lieu of stronger housing support, some states are also prohibiting evictions. Over 12 states, including New York, have implemented eviction moratoriums, which temporarily pause evictions.

While eviction moratoriums provide relief during stay-at-home orders, they will eventually be lifted. It’s not likely that much will have changed for those who are newly unemployed by then.

In Portland, Oregon, public officials are supporting rent and mortgage forgiveness. The City Council signed a letter last week detailing the need to erase the bills amid the coronavirus.

“Many have contacted our office with the same fears for April 1st—rent day. Today, City Council signed a letter with an urgent call for action: Forgive all rent and mortgage payments for renters and businesses whose income or expenses have been substantially impacted by COVID-19,” Portland City Commissioner Jo Ann Hardesty tweeted.

While state government can put in some safety nets for renters, it’s the federal government that has to step in for landlords. Landlords pay banks for mortgages, which states don’t have the power to pause.

So, while some states are freezing or forgiving rent payments for tenants, bills for landlords can still exist, although mortgage relief has been granted for some homeowners.

In New York, the largest bill of the year takes place on June 1 for landlords according to the New York Times. Property owners in the city pay real estate taxes on this day, which make up 30% of the state’s budget.

Some larger landlord companies have leeway to make it through the following months while other landlords will rely on their different sources of income.

One Brooklyn landlord, Mario Salerno, was in a position to forgive April’s rent for his 200 to 300 tenants among 18 properties. He is estimated to lose hundreds of thousands of dollars according to the New York Times.

But not everyone is in a position to miss out on a month’s payment.

If a landlord cannot front this month’s bill, let alone the following months, then the utilities for the building could be shut off. Even worse, small landlord owners could fall back on their mortgage loans and banks would foreclose the building.

What happened on April 1st?

NMHC reported that one-third of 13.4 million renters did not pay their landlords for the month of April. It was a 12-percentage point decrease from rent paid in March. NMHC said despite the drop it is still a considerable amount given the circumstances.

“It is important to note that a large number of residents met their obligations despite unparalleled circumstances,” Doug Bibby, NMHC president, said.

These numbers do not illustrate the full picture. For one, it polled less than half of renters in the U.S. Also, it does not account for subsidized housing for low-income renters.

NYCHA said numbers for April’s rent have not been finalized yet. In addition to total rent paid, or unpaid, they will also know which renters cannot pay due to unemployment.

On NYCHA’s website, unemployed tenants or tenants with docked hours can apply for Interim Recertification which sets up a new rent payment plan. But, renters must document their new employment and income status.

This would differentiate how many New Yorkers cannot pay rent out of necessity rather than willingness to strike.

By May, it’s likely there will be more people who cannot afford rent due to unemployment. And, if the rent strike continues to gain momentum, there could be more tenants that stand against paying by choice.

Is there any more relief coming for renters?

Not one governor has backed rent forgiveness yet, despite some support from Congress, including Ocasio-Cortez, Omar and Sen. Bernie Sanders (I-Vt.).

But, leaders on Capitol Hill, as well as Trump, have shown signs that another stimulus relief package is likely.

“We could very well do a second round,” President Donald Trump said at a press briefing recently. “It is absolutely under serious consideration.”

Governors, including New York Gov. Andrew Cuomo, said the first $2 trillion was a mere step in the right direction. And housing advocates are lobbying for more support in the second round.

Diane Yentel is the chief executive of the National Low Income Housing Coalition. The lobbying group, along with NMHC, is pushing for $100 billion in direct subsidies to tenants in the next relief package.

“Eventually the moratoriums will be lifted, and we don’t want to create an environment where low-income renters fall off a financial cliff and we have a rash of evictions,” Yentel told the New York Times.

But as of now, rent payments are not gone for good. Instead, they loom in the future until one side pays them.