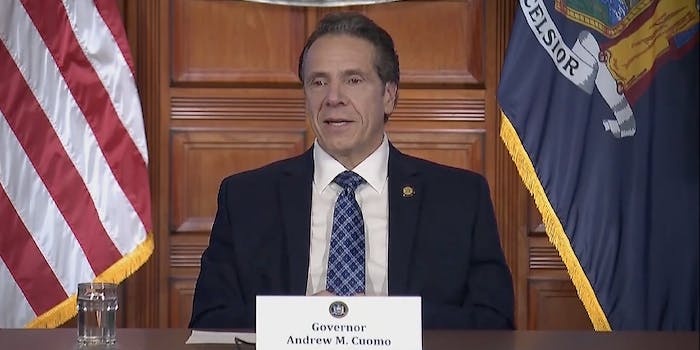 About 40% of New York City tenants are expected to not pay April rent.

During a Tuesday press conference about coronavirus updates, Cuomo responded to a question about eviction freezes, joking that his “daughters have stopped paying (him) rent.”

“I’m not even sure that their finances have dropped significantly, but I think they’re just taking advantage of the non-eviction order that I, myself, posted,” Cuomo said during the press conference. “I resent it, but there’s nothing I can do about it legally.”

“Fun joke to make while forcing your constituents to choose between paying rent and buying food and medicine,” Twitter user @ethanchiel wrote.

Others dubbed it “out-of-touch” and “tone-deaf.”

“Millions of people are not going to be able to pay rent tomorrow…and the only thing @NYGovCuomo has to offer is tone-deaf dad jokes,” the New York Communities for Change Twitter account wrote.

Earlier in March, Cuomo ordered a moratorium that would suspend evictions throughout New York state until at least mid-June. However, some tenants and advocates say the 90-day moratorium is not enough since tenants must eventually pay back their rent, according to Curbed NY.

This presents a challenge for renters who have lost employment as a result of coronavirus. The New York Department of Labor reported receiving over 80,000 “unemployment insurance claims” in just one week in March.

Industry insiders say they expect about 40% of New York City tenants to not pay April rent, the New York Times reports. The average cost of rent for a Brooklyn studio apartment in February 2020 was about $2,600, according to the real estate company Douglas Elliman.

Thousands have called on Cuomo to go even further to protect renters. A petition on Change.org—which has been signed by over 140,000 people and started by New York City council candidate Marti Gould Cummings—calls for a prolonged payment freeze, subsidized payments, and instituted payment plans.

New York City Mayor Bill de Blasio has called for a rent freeze across the city.

“The people of our city are struggling and a rent freeze is the lifeline so many will need this year to stay above water,” de Blasio said, according to a press release.

Currently, state lawmakers are working on legislation that would suspend rental payments for at least 90 days. However, the bill has yet to make its way to Cuomo’s desk.