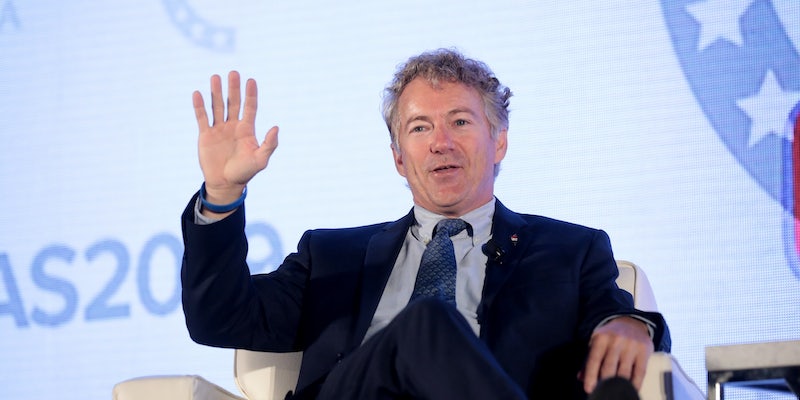 Dirty Delete: Rand Paul loves liberty, except when he doesn’t

He’s a study of contradictions.

Sen. Rand Paul’s (R-Ky.) politics are like a box of chocolates: You never know what you’re gonna get.

Paul was once seen as a rising political star with bipartisan appeal. In the halcyon days of 2015, the Daily Dot wrote a story called the “Four surprising reasons Rand Paul might be the liberal candidate you’re looking for.” The piece referenced Paul’s staunch opposition to the privacy nightmare that is the Patriot Act, the prison-industrial complex, police violence, the war on drugs, and mandatory minimum sentencing.

The Rand Paul of today isn’t quite the same as the liberty loving man of yesteryear. Though shades of that guy remain (mostly regarding COVID-19), he’s a study of contradictions, such as when he tweeted in 2013 that the United States shouldn’t provide aid to nations whose citizens burn our flag.

Once one of Edward Snowden’s fans, in 2019, Paul called for outing the whistleblower who exposed Trump’s effort to coerce Ukrainian President Volodymyr Zelenskyy into digging up dirt on President Joe Biden.

Paul’s one of the Senate’s biggest opponents of reproductive freedom.

Ever the charmer, he also has a history of telling female reporters how to do our jobs.

While Paul condemned the Capitol riot as “wrong and un-American” and voted to certify the 2020 election for Biden, he also trumpeted the election fraud lies that helped inspire the mob to attack Congress. Paul calls the Jan. 6th committee a “partisan witch hunt.”

Paul has a history of rubbing elbows with some unsavory extremists. Paul worked on his father’s presidential campaign in 2008 alongside Stewart Rhodes, who later founded the Oath Keepers and is charged with seditious conspiracy over the Capitol riot.

In 2016, Paul fondly reminisced about when he and Alex Jones “staked out” billionaires. He’s been on Jones’ show multiple times and his campaign website currently includes a link to an InfoWars piece about him blasting COVID mandates to Dan Bongino.

Paul is running for his third term in the Senate, where he is a powerful and influential force.

Although he’s facing a strong challenge from Democrat Charles Booker, Kentucky skews heavily Republican, so the odds are high that the Bluegrass State will gift the Senate with six more years of Rand Paul.