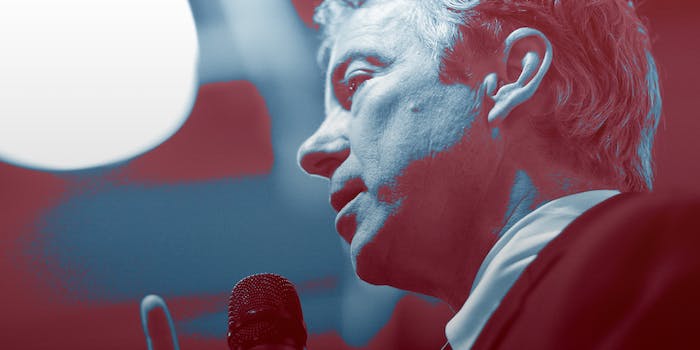 Can he beat his previous speech record of 13 hours?

“I will not rest. I will not back down,” Paul told donors in a Wednesday email. “I will not yield one inch in this fight so long as my legs can stand.”

Paul’s speech can be watched here.

Paul touted his speech as a filibuster against reauthorization of the Patriot Act, but because the Senate is not actively considering that legislation, he is not technically filibustering. However, as the Washington Post notes, Paul’s marathon speech can effectively filibuster Senate business by delaying key floor activities that need to happen for several bills to be considered tomorrow, Friday, and through the weekend.

Paul spokeswoman Jillian Lane told the Daily Dot that the senator “will speak until he can no longer speak,” and that Sen. Ron Wyden (D-Ore.), another leading surveillance critic, planned to join Paul on the Senate floor “later today.”

In the hours before taking the Senate floor, Paul publicized his intention to stop the renewal of the Patriot Act over social media, asking followers to change their avatars to one reading “Stop NSA Spying.”

I've just taken the senate floor to begin a filibuster of the Patriot Act renewal. It's time to end the NSA spying!

RETWEET if you are standing with me against the so-called "PATRIOT Act!"https://t.co/yJi1cJwSmK

The target of Paul’s floor speech is Section 215 of the Patriot Act, the controversial provision that the government has used for the dragnet collection of Americans’ telephone records. A federal court ruled earlier this month that Section 215 did not, in fact, authorize the government to collect those records.

Paul on the Senate floor: "The collection of records that is going on is beyond your imagination."

Section 215 and other provisions of the Patriot Act will expire on June 1 if they are not renewed by Congress. Senate Majority Leader Mitch McConnell (R-Ky.) has introduced a bill to reauthorize the Patriot Act without reforms, while Senate Democrats want the upper chamber to follow the House in passing the USA Freedom Act, which ends the Section 215 bulk-phone-records program.

The right to be left alone is the most cherished of rights. #StandwithRand

Would you want the government to be in your house for hours and hours without probable cause for a warrant? https://t.co/B28j5BXCOn

Update 2:56pm CT, May 20: Sen. Wyden arrived in the nearly empty Senate chamber at 3:43pm ET to ask Sen. Paul a question, thereby allowing him to sit down, drink water, and do anything else that would otherwise force him to relinquish the floor. In a true filibuster situation, relinquishing the floor would mean the end of said filibuster. After Wyden’s arrival, he and Paul conducted exchanges about various issues, from the vagaries of the Patriot Act to FBI Director James Comey‘s push for encryption backdoors.

Update 3:29pm CT, May 20: Sen. Mike Lee (R-Utah), who supports passing the USA Freedom Act, has taken the floor. Lee and Paul disagree about the USA Freedom Act, but Lee said he is “confident that Senator Paul….will be happy to offer and debate amendments to improve it.”

Update 3:59pm CT, May 20: The not-filibuster expanded again as Sen. Martin Heinrich (D-N.M.) stepped onto the floor to ask Paul a question. Heinrich, a member of the Senate Intelligence Committee, has criticized the NSA’s bulk-records programs for several years.

Update 4:51pm CT, May 20: Sen. Steve Daines (R-Mont.), who worked in the tech industry before entering Congress, took to the floor, saying he was “deeply concerned” about the bulk phone-records collection program. He said he had hosted a telephone town-hall meeting on Tuesday night in which his constituents brought up the program more than any other issue. “This is one of the issues I hear about most from my fellow Montanans,” he said.

Update 5:05pm CT, May 20: Another Democrat, Sen. Joe Manchin (D-W.V.), arrived to give Paul a break. He inveighed against the “unconstitutional” and “unnecessary” bulk collection of Americans’ phone records. Manchin, a red-state Democrat who has frequently bucked the liberals in his own party, nonetheless aligned himself with Paul’s civil-liberties mindset on surveillance, saying the two “agree more than we don’t” on that subject.

Update 5:41pm CT, May 20: Sen. Chris Coons (D-Del.) arrived to relieve Paul, after the Kentucky senator spent nearly half an hour reading from government reports that highlighted the ineffectiveness of the bulk-records program.

Update 6:48pm CT, May 20: Sen. Jon Tester (D-Mont.) began speaking, saying that he wanted to see “real reforms to the Patriot Act,” a law he said “violates law-abiding citizens’ right to privacy.” “We need to have a debate on what he Patriot Act is about, how it’s being utilized, and how we need to move forward,” Tester said, before yielding the floor back to Paul.

Update 7:50pm CT, May 2o: After a stretch of time in which Paul read news articles and blog posts—and clearly began feeling the effects of his drawn-out floor speech—Sen. Maria Cantwell (D-Wash.) gave Paul a rest and asked him a question about encryption. Cantwell, a member of the Senate’s liberal wing, reminded the chamber that the government’s attempts to foil encryption went all the way back to the “Clipper Chip” of the 1990s.

Photo via StumpSource.org/Flickr (CC BY 2.0) | Remix by Max Fleishman