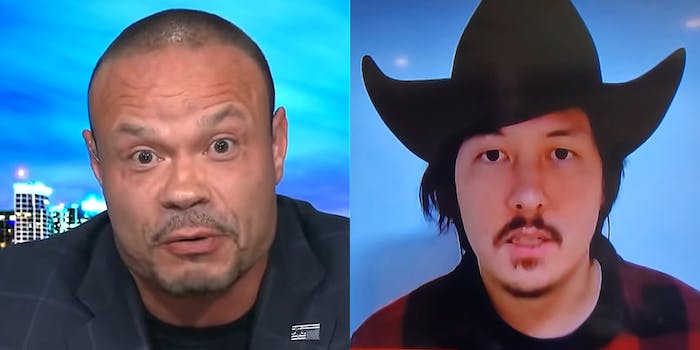 It began when Watkins had his identity spoofed on the site.

Over the last few weeks, Ron Watkins, the former administrator of the internet cesspool 8kun has reinvented himself as an expert on voting machines, digital ballot stuffing, signature matching, and the ins and outs of voter fraud. Despite having no training in any of these areas (indeed, a legal filing responding to a lawsuit where Watkins was cited as an expert witness called him “unqualified” to present such evidence), his frequent tweeting and “bombshell” videos claiming to show fraud in action have made him a rising star in the mainstream right-wing media.

So why was he having a Twitter spat with Dan Bongino, one of the most popular podcasters and media figures in conservatism? And over Parler, of all things?

The Twitter feud, which played out over multiple public posts on Dec. 10, stems from Bongino’s involvement with Parler as a principal investor and from Watkins having his identity spoofed on the right-wing social media site by a hacker, thanks to what appeared to be some pretty serious security flaws—at least one of which Bongino claimed wasn’t real. While all of it seems like sour grapes and meaningless infighting, the stakes are surprisingly high. Parler has emerged as a legitimate competitor to Twitter, and the idea that it’s easy to hack and less than secure would be a body blow to its potential growth, especially in the wake of a viral rumor about leaked DMs that turned out to be false.

Right-wing conservatives have spent several years on a seemingly never-ending quest to find an alternative to mainstream social media sites, something that would allow free speech without hindrances like rules and moderation. Some flopped, like Gab. In summer 2019, Parler started to see an influx of high-profile conservative pundits and social media influencers who claimed they’d be abandoning Twitter. It didn’t last, with most spending very little time on the buggy app before heading right back to Twitter. Parler soon became a site where conspiracy theory figures went to complain about their Twitter bans before getting back on Twitter with ban-evading accounts.

That would change after the 2020 election and what right-wing pundits saw as unacceptable censorship by major social media sites, starting with tepid fact-checks of President Donald Trump from Twitter. So Parler saw another influx of growth— as many as 4.5 million new accounts this time, according to Parler CEO and co-founder John Matze. Some were huge names in conservatism, such as Sean Hannity and Mark Levin, Sen. Ted Cruz (R-Texas), Rep. Devin Nunes (R-Calif.), and even Trump’s son Eric. Parler was beginning to seem like a real alternative to Twitter, a place where the president’s tweets wouldn’t be labeled as false, and where conservative discourse could take place without fear that “unacceptable content” would be removed.

But the site’s growth also brought some serious scrutiny over Parler’s security, its verification process, and the amount of information it gathered from users—not to mention that its content seemed to be nothing but right-wing conspiracies about Joe Biden stealing the election from Donald Trump, QAnon influencers, and spam links to porn sites. All of it seemed to come to a head in mid-November when information security accounts on Twitter started circulating documents claiming to be a massive hack of Parler’s user base, including names and info the site needed to verify accounts—including pictures of driver’s licenses, social security numbers, and phone numbers. It was already public knowledge that Parler required these sensitive documents for accounts to be verified, and the release of such information would be one of the most damaging hacks in recent memory.

It turned out that the site wasn’t hacked, but it did have a huge tranche of user data leak from the vendor responsible for its email newsletter list, thanks to hacker and Anonymous co-founder Aubrey Cottle. Believing the site was running a data-gathering operation and not making enough effort to keep that data secure, Cottle grabbed the massive tranche of data from the vendor’s cloud servers, which had been incorrectly configured to make the data public. Parler fired the vendor and reiterated that it hadn’t been hacked, but the damage was done.

“The data present within Parler’s [email] newsletter database being this 5-year-long collection of highly targeted far-right publications, in tandem with Parler data itself, is highly suspect,” Cottle told the Daily Dot over Twitter DMs, believing that the extensive data Parler’s email vendor had acquired could be used for voter targeting in a similar way to the Facebook data gathered by Cambridge Analytica. Given that this data was extensively used by the Trump campaign to influence the 2016 election, Cottle saw the potential for similar targeting in Parler’s data, and felt the need to act.

Parler’s verification process was already in the spotlight thanks to posts from a verified account seeming to belong to former 8kun administrator Ron Watkins—posts which claimed that his father Jim, the owner of 8kun, was also the poster behind the Q drops (the anonymous missives of a supposed government insider that spawned a conspiracy); while also hitting back at people who made fun of him wearing a cowboy hat during an interview about his non-existent evidence of election fraud. Ron quickly responded that he had no Parler account and whoever was behind this was spoofing him, with the account in question swiftly deleted. But how could a verified account also be fake? And what did that say about the security measures Parler had in place to protect the information of its users? Why was it asking for so much sensitive information, anyway? And who had access to it?

It turned out that Cottle was behind this as well, changing the name of his already-verified account to Ron Watkins and posting spoof posts—both for “the lulz,” as he told the Washington Post, but to highlight a serious flaw with the site. If verified users could change their name, there was no point to verification—other than providing Parler with extremely valuable data that could be weaponized later down the road. And it appeared to a problem Parler was unable or unwilling to deal with.

“Parler has repeatedly shown themselves to be unreliable in security-related statements after the discovery by myself a few weeks ago that verified influencer accounts can change usernames at will has not been resolved or addressed in any meaningful manner,” Cottle said. “I had in essence invalidated every existing verified user and a properly implemented solution would have required the re-verification of all existing accounts.”

All of this finally exploded on Twitter in a feud between Ron Watkins and Parler investor Dan Bongino. Ron claimed that Parler was “compromised” and not to use it—citing concerns about the ability of verified users having their identity stolen.

Ron had already notified both Bongino and Parler about the security breach, saying he had never submitted identification to Parler and did not have an account on the site. Parler deleted the account but did little beyond that. This time, Bongino shot back by claiming that “Parler DOES NOT ask for social sec. numbers from users” and calling Ron Watkins “a joke” who was “posting lies about Parler on a Twitter platform that HATES MAGA, and is actively mining and selling your data.”

“Good luck with your Twitter masters,” he concluded in a reply to Watkins, who has said he is not and will never be on Parler.

While Bongino appears to be correct in saying Parler doesn’t ask for social security numbers, longtime Parler users went on Twitter to say that when the site was launched, it did use social security numbers as one way to verify user accounts, though it no longer appears to. Watkins tweeted that the site should make more than “a reasonable effort” to protect this information.

Meanwhile, Bongino has continued to claim on a daily basis that “TWITTER IS A HOT GARBAGE COMPANY THAT DISCRIMINATES AGAINST CONSERVATIVES” and promote Parler as a free speech alternative.

But the issues at heart still remain. The site’s last privacy policy, updated on Nov. 27, clearly states that it “may ask for information that can be used to verify your identity, such as scans of your government-issued photo identification.” And the site hasn’t acknowledged if the problem of verified users being able to change their name has been fixed. In the end, Watkins appeared ready to drop the feud, tweeting to Bongino that he was merely looking out for the conservative social media community and would “write up a quick report on parler issues and vulnerabilities for your team to fix up.”

While the argument between Watkins and Bongino was playing out over Parler’s security—or lack of it—at least one other conspiracy theory seemed to be punctured by the feud: that Parler was some kind of Russian data-gathering operation. The theory, which went viral thanks to a thread by researcher Dave Troy claiming multiple connections between Parler founder Matze and Russian figures, had racked up over 21,000 retweets alleging that the site was a Russian intelligence operation and that Bongino didn’t have the funds to invest in such a site.

Similar accusations have been leveled at the Watkins family, that QAnon and 8kun are Russian influence operations meant to sow discord and create chaos. If both Bongino and Watkins are dupes of Russia (and to be clear, there’s no real evidence that either is), then to have them feud publicly and insult each others’ wares would seem to run counter to the goals of sowing discord and creating chaos. As it stands, Watkins would seem to have the high ground in this argument—not because he’s a Russian agent, but because he’s right about a verified user being able to change their name being a serious security flaw.

As for why Cottle went to all the trouble to expose Parler, a site that’s still struggling to get out of Twitter’s shadow, he appeared to have multiple reasons. When asked by Daily Dot if his goal was to bring down Parler, to embarrass Ron Watkins and Dan Bongino, or simply to get people to not share sensitive information with dodgy social media sites, he replied simply “all of the above, really.”