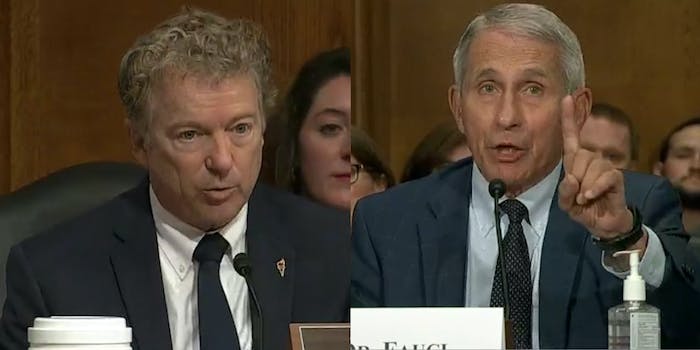 Fauci to Rand Paul: ‘You do not know what you are talking about’

'If anybody is lying here, senator, it is you.'

Dr. Anthony Fauci and Sen. Rand Paul (R-Ky.) got into a heated exchange on Tuesday that led the doctor to tell the senator, “you do not know what you are talking about.”

The back-and-forth occurred during a Senate hearing and was the latest bout of theirs over the last several months. Paul questioned Fauci about “gain of function” research on coronaviruses in China by the National Institutes of Health.

Paul suggested that Fauci lied in previous testimony about the NIH-funded “gain of function” research, which Fauci strenuously denied.

The Kentucky senator started off the exchange.

“Dr. Fauci, knowing that it is a crime to lie to Congress, do you wish to retract your statement of May 11th where you claimed that the NIH never funded gain of function research in Wuhan?” Paul asked.

“Senator Paul, I have never lied before the Congress and I do not retract that statement. This paper that you are referring to was judged by qualified staff up and down the chain as not being gain of function…” Fauci responded before being interrupted.

“So you’re saying you take an animal virus and increase the transmissibility to humans, you’re saying that’s not gain of function?” Paul asked.

Visibly upset, Fauci then pushed back at the senator.

Their exchange continued, with Fauci saying that Paul was trying to imply “what we did was responsible for the deaths of individuals.” Fauci added: “If anybody is lying here, senator, it is you.”

Fauci’s response to Paul quickly caught the attention of people online. The back-and-forth became a trending topic on Twitter.

“Dr. Fauci just knocked the absolute shit out of Rand Paul. It brings me such pleasure,” one Twitter user wrote.

“Dr. Fauci EVISCERATING Rand Paul is just the stimulant I need this morning,” another Twitter user chimed in with.

“rand paul got hit with a FAUCI OUCHIE!” another user joked.

Fauci and Paul have fought repeatedly, as right-wingers have sought to demonize the face of the U.S. coronavirus response over the course of the pandemic.