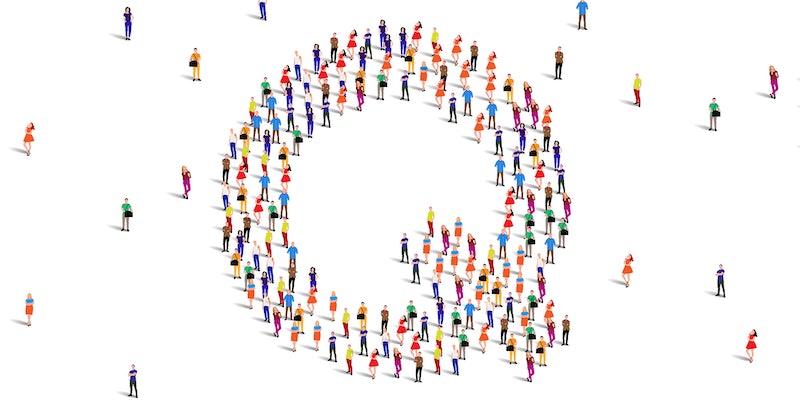 QAnon is now too big to fail

What a difference a year can make.

In October 2020, the QAnon conspiracy theory “celebrated” the third anniversary of its first posts on 4chan by finishing up a year’s worth of drops decrying Democratic nominee Joe Biden as both corrupt to the bone and a decrepit husk being propelled to a fake victory on a truckload of fraudulent mail-in ballots.

But just days after the anniversary of Q’s first post, Biden claimed victory over Trump. And while Trump sulked away from the national stage, QAnon, a year after the 2020 election, is anything but defeated.

Its ostensible leader, Ron Watkins, is running for Congress. Believers in the theory gained their first seats in the House of Representatives, where they introduce bills to impeach Biden on a weekly basis. Far from neutered, its adherents led the largest physical assault on U.S. institutions in modern times.

Although their push to overturn the election failed, as the wake still settles from Jan. 6, the months after can only be described as a complete success. In its fourth year, QAnon is too big to fail. What was once cryptic riddles is now an all-consuming movement of political and medical conspiracy theories and hoaxes, with a base of support that spans the nation. Q believers have moved from scanning message boards to influencing local school boards. They’re in power in local government and steering mainstream conservative media. They’re primed to lead another assault on Congress, with at least 45 people who’ve promoted the theories running for office, trying to build the institution’s first QAnon caucus.

It’s a movement that is too big to be banned, too diffuse to easily be debunked, and too popular to be written off as part of the fringe. The fringe is now mainstream.

Theirs are the theories that will power conservatism in the future: not with lower taxes or personal responsibility, but with a complete inversion of reality that lets believers construct their own personal universe to live in without consequences or pushback. It’s a blob of paranoia where members of Congress refuse to investigate the attack on their own seat of power while speaking at Q rallies; where “Back the Blue” GOP senators attach strings to funding the Capitol Police; and where over half of registered Republicans think Trump is still the president. Any candidate with a chance of winning has to pander to the stolen election/COVID-19 hoax/anti-Critical Race Theory Q-pilled faction of the party—because it increasingly isn’t a faction, but the party itself.

And the movement did this without direction from their titular leader, Q, who hasn’t posted since last December. In disappearing, Q didn’t hold the movement back. In fact, their leaving the helm is what allowed it to explode.

Without any leadership from the top, Q believers took control and guided the movement in countless different directions, all of which overlapped effortlessly. Q’s following was everywhere, fighting on digital and legal fronts to keep Trump in office, and counting Trump-world luminaries among their number. In the 2021 version of QAnon, it became just as common to see believers at school board meetings screaming about vaccines as it was to see them at Trump rallies cheering as their “real president” boasted he won in a landslide. Q drops are rarely, if ever, brought up in these venues. There’s no need. Q’s absurd conspiracy theories and violent ideation are now in the halls of Congress and powering a massive industry of alternative medicine products and electoral fraud videos.

Q didn’t even call on his followers to go to the Capitol on Jan. 6. The movement did not need its leader to push the biggest rally the movement had ever seen, because it already haad all the momentum it needed.

Fueled by Trump’s request for his followers to join him for a “wild” rally on that day, thousands of supporters encompassing a range of extremist movements and conspiracy theories arrived. They planned to disrupt the vote certification of the 2020 election, convince Vice President Mike Pence to throw out the election results, or simply shoot Democratic members of Congress. And after Trump commanded them to march on the Capitol, they did just that, forming a mob that broke through police lines and breached the highest seat of power in the country.

One of the first insurrectionists through the door was Douglas Jensen, wearing a QAnon T-shirt as he chased a Capitol Police officer through the building. He was one of hundreds of publicly-known Q believers at the Capitol that day, two of whom died in the process.

In the aftermath of the chaos of Jan. 6, the old Q finally and irrevocably gave way to the new. The social media giants banned tens of thousands of insurrectionists and Q believers, including Ron Watkins and Trump himself. But Q promoters were already wizards at ban evasion, and simply took their followings to alternative social media sites, with the majority finding large audiences of extremists and conspiracy theorists on the secure messaging app Telegram.

The new Q features new promoters pushing out conspiracy theories never mentioned in Q drops, such as the rabidly antisemitic GhostEzra, and Patel Patriot, who became a minor influencer for his convoluted “devolution” theory claiming Trump never left office. These and other stolen election truthers make up the backbone of an endless roadshow of Q/health freedom/stolen election conferences.

Whereas once it was noteworthy for a few dozen Q believers to get together in person, these conferences are the future of a movement that is about everything: the border, the Second Amendment, social media censorship, and COVID. The “Patriot Double Down” las week was merely the latest in what is a weekly parade of gatherings for angry Trumpers and dug-in Q believers to air grievances and buy T-shirts.

At the Las Vegas rally, stolen election advocates mixed with border hawks and had drinks with big pharma conspiracy theorists who think Dr. Anthony Fauci is keeping ivermectin away from the people. And one of their heroes, Ron Watkins, spoke at the event, finally leaving Japan for America, the country whose strings he’d been pulling from afar as the person most likely behind Q. And he did it not as a message board troll facing the music for his misdeeds, but as a potential member of Congress.

Watkins is diving into the mainstream, parlaying his self-made “fame” as an election fraud expert into a run for Congress in Arizona.

And while filmmaker Cullen Hoback, who did a docuseries on QAnon for HBO, got Ron to nearly out himself as Q, the movement gave a collective “who care?” Believers want the drops to be secret missives from military intelligence patriots, so that’s what they are. It simply doesn’t matter who wrote them or that they’re mostly gibberish, merely that they exist and affirm those who believe them. And it also won’t matter that there likely aren’t any more coming. New drops aren’t necessary. Just as Christians don’t need new books of the Bible to proselytize, Q believers didn’t need new Q drops to tell them what they believe.

The first iteration of QAnon is over. But the future of QAnon is here. And it will be for a long, long time.