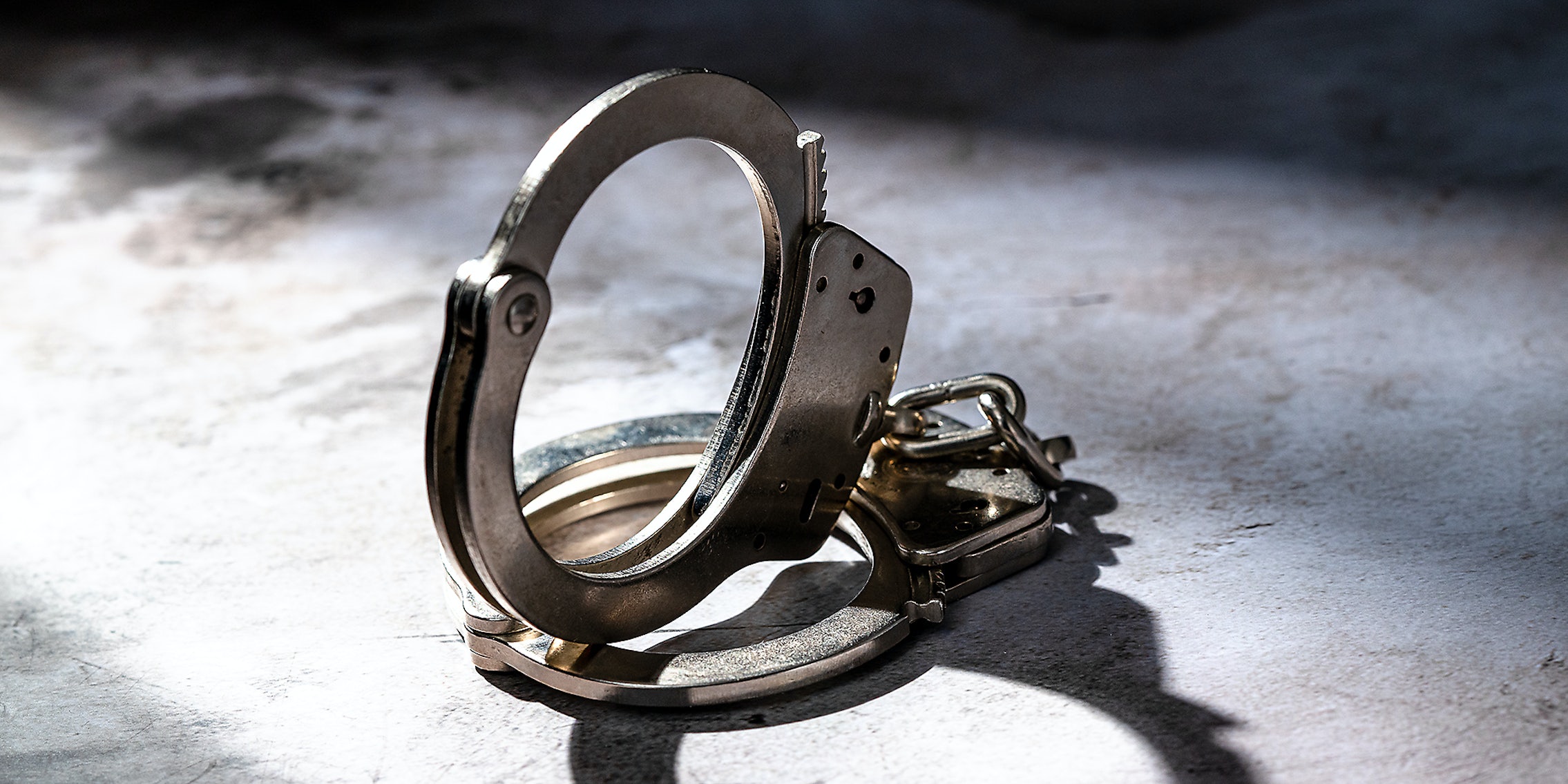 He pushes QAnon online. In real life, he's been arrested for domestic violence, grand theft, DUI, and others.

Ghost Ezra is a QAnon guru and online presence who operates what experts believe is “the world’s largest antisemitic internet channel.”

Ever since the person posting as Q disappeared after the 2020 election, its adherents have been searching for someone to fill the void. One of them was the enigmatic Ghost Ezra. Since first posting on Telegram in January 2021, his following has grown exponentially, becoming one of the movement’s most well-known entities. As he grew, he shifted the entire QAnon movement into outright anti-Jewish propaganda

On Telegram, preaching to his 330,000 followers, he shares right-wing conspiracies, disinformation, and neo-Nazi content. On his channel, he has claimed that Jewish people started both world wars, and accused them of trying to achieve control and domination of the world.

QAnon is the conspiracy theory that believes former President Donald Trump is fighting a cabal of Democratic pedophiles and Hollywood cannibals.

Once an unknown and prolific spewer of hate speech, Ghost Ezra was recently outed as Florida native Robert Randall Smart by the investigative firm Logically.

Those records show Smart has been arrested at least six times since 2002; for domestic violence and resisting arrest; DUI; trespassing and disorderly conduct; grand theft; another probation violation; and another case of grand theft. The Daily Dot found two additional cases for Smart in Florida’s court system for criminal mischief and felony possession of a controlled substance, but was unable to obtain the arrest reports.

Records also show Smart pled no contest to DUI and no contest to trespassing. On both grand theft charges the cases ended with adjudications being withheld. The domestic violence and disorderly conduct charges were dismissed. He also has a guilty plea for possession of a controlled substance.

Smart did not respond to multiple inquiries sent to phone numbers, email addresses, and social media channels associated with him. He has not responded to the Logically report outing him.

He began his journey on Twitter, but shortly after the Capitol insurrection, social media began a wave of purges targeting radical, right-wing accounts. After Twitter suspended Ghost Ezra and his 18,000 followers, he migrated to Telegram, a right-wing social channel that’s exploded in the wake of post-Jan. 6 social media bans. There, with virtually no moderation at all, he exploded to 330,000 followers.

The Anti-Defamation League has called his channel “the biggest pro-Hitler voice on Telegram and the single largest QAnon influencer on the platform.”

His followers, unaware of his identity, were also unlikely unaware they were receiving guidance and missives from someone who frequently found himself on the wrong side of the law.

On Oct. 6, 2003, Boca Raton Police received a 911 call from Smart’s residence. After officers arrived, they observed that, “several objects on the floor (were) broken and the hallway closet (was) broken up.”

According to the victim in the report, “when suspect Robert got up this morning, he appeared to be under the influence of something…(he) became upset … throwing things and punching holes in the walls.”

The victim said Smart was “so out of control,” according to the report, that they were worried he was going to attack him.

An officer with Boca Raton Police wrote that they, “attempted to verbally calm suspect Robert down … but he would not listen … (he) began walking towards the kitchen … at which (point) I told him to stop … he became very agitated and combative.”

The arresting officer went on to say as he attempted to handcuff Smart, Smart resisted, and he was unable to place him in restraints. Another officer had to assist.

Police determined the victim was concerned enough for their safety that charges of domestic violence were warranted. He was also charged with resisting arrest.

That wasn’t the only streak of anger Smart appeared to flash in his life.

Smart also was arrested in August 2003 outside a Florida bar called the Porterhouse, charged with trespassing and breach of the peace, after an officer asked him to leave the premises. According to the arresting officer, “I advised listed [Smart] to leave the property 3 times. Listed refused to leave and then attempted to force his way in the bar. He then took a bottle of vodka from the outside bar and smashed it on the ground.”

It appears in the report that Smart refused to identify himself, but subsequently gave his name to a booking agent. At the time he had two outstanding warrants for two different parole violations, one for a DUI, and one for possession of a controlled substance.

He pled guilty to the trespassing charges.

As for the parole violation on DUI charges Smart received at the bar, he had been arrested less than a year earlier for driving under the influence on Sept. 14, 2002.

At first, the Orange County Sheriff’s arrest report appears to be standard DUI fodder. “On routine patrol,” the report from an officer states, “I observed a blue Ford Taurus traveling northbound … the vehicle was straddling two lanes.”

When asked to recite the alphabet, Smart said, “I can’t do that,” before proceeding to take and pass the alphabet test. Police detained Smart after he failed other parts of his field sobriety test. He refused to take a breath test to determine his blood-alcohol content.

But when police searched Smart’s car, they discovered, “red and blue flashing lights in the front interior of the vehicle … a taser … in the front seat … and a shotgun in the trunk.” Sitting in the passenger’s seat was a female passenger who said she had “just met Smart at a party nearby.”

She said she had observed him drinking vodka. The passenger did not respond to an inquiry from the Daily Dot.  No further information was available about this arrest.

Outside of the arrests for drinking and domestic disturbances, Smart has two grand theft charges on his record.

On Sept. 28, 2004, Boca Raton Police arrested Robert Smart’s father, during a domestic disturbance. After being arrested, he told Boca Raton officers that his son had stolen cell phones hidden inside the house. Police retrieved those phones, discovering that Smart had taken them from an AT&T store, where he formerly worked. Smart originally told officers he had purchased them on eBay and planned to resell them, but could not provide officers with a receipt.

At one point he said he could not provide proof of purchase because he used PayPal and “the computer was not working.”

Smart was arrested on Oct. 9, 2004, after Boca Raton Police finished their investigation. He was charged with grand theft. The value of the stolen phones was listed at $1,350.

Smart’s father is deceased. An adjudication of guilt against Smart was withheld, according to records.

Though those arrests happened when the 39-year-old Smart was younger, he has more recent arrests on his record as well.

In June 2014, Coconut Creek Police, in Broward County, responded to a call from a Walmart in town. There, they met with a Walmart Loss Prevention Associate who said he’d observed Smart putting items from the store into Walmart branded bags he’d brought with him and then attempting to leave with the items. According to the report, Smart took ”sporting good items, cell phones, and USB drives” without paying. He also was wearing a hat from the store, which he had placed on his head and removed the price tag.

“I was trying to return those items sir, I was not stealing,” Smart told the officer. That apparently did not convince police and Smart was arrested again for grand theft. The estimated total of goods Smart was accused of stealing was over $1,000.

Smart also brought a black bag into the store that had, “(3) scopes, (2) flashlights, gun cleaning supplies, safety goggles, and ear plugs,” according to the Walmart employee quoted in the report.

No explanation was provided why. Smart reached a plea and adjudication was withheld on the charges.

Despite being outed by Logically, Ghost Ezra remains a powerful force in the QAnon community. But a look behind the curtain of anonymity shows that perhaps these shouldn’t be the types of people sharing messages of revolution with the world at-large.