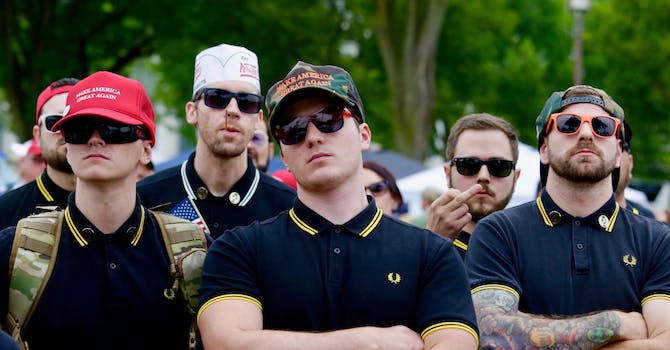 The Proud Boys declare war on the uncool ‘QBoomers’ of QAnon

On Telegram, Proud Boys are bashing the conspiracy theorists.

The honeymoon may be over between the Proud Boys and QAnon, two factions of the extremist right that converged at the Capitol riots.

On Jan. 6, a deadly insurrection attempt to keep President Donald Trump in power sent shockwaves across the country. The riots saw numerous far-right groups converge on the nation’s capital in what would be a failed effort to subvert democracy.

The Proud Boys and QAnon were two of the most prominent of those groups. The Proud Boys are a violent group of Western chauvinists. QAnon is a conspiracy theory that the world is secretly controlled by a cabal of satanic, pedophile cannibals. Both are adamantly pro-Trump.

Much like the deadly 2017 Unite the Right rally, the Capitol riots led some to fear that right-wing participants like QAnon and the Proud Boys had formed a dangerous, potentially potent alliance. QAnon’s detachment from reality and Proud Boys’ known propensity for violence could together foment disastrous results.

Two weeks later, the honeymoon may be over before it ever really began.

The Proud Boys appear to have unceremoniously dumped QAnon. Telegram channels associated with the Proud Boys are filled with degradations of QAnon followers, referred to variously as “Qtards,” “QBoomers,” and other slurs. They mock QAnon slogans like “trust the plan,” and ridicule the conspiracy theory itself.

In the waning hours before right-wing haven Parler was booted from the internet, Proud Boys leader Henry “Enrique” Tarrio instructed his followers to join him on Telegram, an encrypted messaging app. A proliferation of Telegram users and channels followed.

Some of the channels, such as Proud Boys USA and Enrique’s Parler Bomb Shelter, have the quasi-official Tarrio stamp of approval; others, like Proud Boys: Uncensored, don’t. But there’s much cross-posting between these channels and shared ideology.

“Qtards are f*****s but Trump might be up to something,” user Wolfish wrote of their belief Trump will find a way to remain in office. “I’m not saying it’ll be successful, but he probably figures he’s got nothing to lose.”

On the same channel, a user with the screen name Reese Henry (Tarrio encourages people to use fake names) complained with apparent exasperation that people were treating Telegram like “Facebook 2.0,” hoping to get “bullshit points/likes for posting some shit some idiot might agree with.”

“We are being taken over people and we need to TALK about IT. We need to start questioning Q so that people can see in the open that Q is the entity we aren’t allowed to question, we need to show people that Q is in control of this American movement, and [then] CRUSH Q,” they concluded.

“Qanon is fake. It’s a psyop to keep patriots ‘trusting the plan’ while Commies took over America,” wrote Luddite Billy on Jan. 13 in response to someone posting a screenshot of a so-called Q drop. “Qtards are getting the rope now,” Phoenix Wright said on Jan. 12. A day prior, BrotherMichael posted, “Qtards are stupid. But shit you are annoying.”

Of a QAnon theory that the inauguration is really an elaborate ruse to arrest President-elect Joe Biden, a subscriber wrote with apparent exasperation, “Omfg we are really living in crazy town.” “Just some more QAnon ‘trust’ the plan bullshit,” another responded.

On Tuesday, Official Wisconsin Proud Boys and Proud Boys: Uncensored both reposted far-right comedian Owen Benjamin‘s post in which he wrote, “If there’s one thing Qtards are known for, it’s not doing anything. Glowf**s need to do more homework before they design another bullshit narrative. WORST FALSE FLAG EVER.”

While some in these channels rail against pedophiles, a hallmark of QAnon, other subscribers try to convince them that the conspiracy theory is just another distraction.

The few who do persist in posting QAnon content on these channels are largely ignored, sometimes ridiculed.

For many, the Capitol riots bore disturbing resemblance to the deadly 2017 Unite the Right rally. As the name implies, the rally was intended to unify the far-right. Given various factions’ racism, conspiracy theories, Holocaust denialism, and propensity for violence, this was a frightening prospect.

In the aftermath, many breathed a sigh of relief, as Unite the Right divided, rather than united, the right.

As it pertains to the Proud Boys and QAnon, it appears that the Capitol riots are having the same effect.