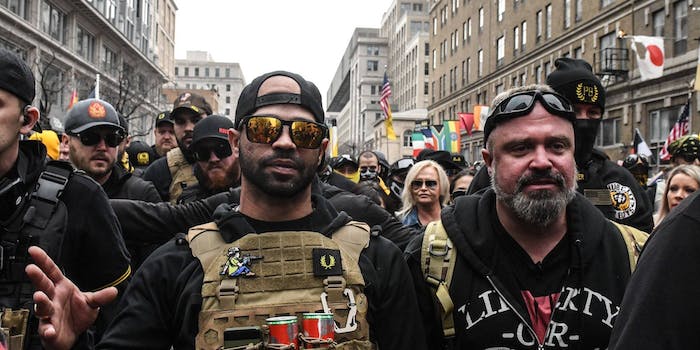 On 'The War Room,' they glorify violence and tell members to 'revolt.'

In the last few years, the Proud Boys have been involved in one violent clash after another. The extremist far-right group with ties to white nationalism doesn’t just relish violence, it encourages it. And lately, Proud Boys leadership has been using a show on InfoWars alum Joe Biggs’ YouTube channel for recruiting, fundraising, promoting events, and urging violence up to and including revolution.

Biggs, a Proud Boys organizer, has been on YouTube for years; his channel, SSG Joe Biggs, has nearly 14,000 subscribers. In July, Biggs posted the first of a new show called The War Boys. Tarrio is a cohost. Proud Boys founder Gavin McInnes has been a guest.

Glorifying violence is standard fare on The War Boys, which also features predictable hyper-masculine tropes like homophobia, anti-feminism, bragging about their physical prowess, etc. An entire episode is dedicated to fanboying Kenosha, Wisconsin shooter Kyle Rittenhouse. “The dudes trying to attack this kid fucked around and found out,” Tarrio says. They often mock liberals, especially anti-fascists, whom they claim are the real instigators of violence.

In a Nov. 20 episode of The War Boys, Tarrio encourages members of the all-male organization the Southern Poverty Law Center labels a hate group to covertly attend President-elect Joe Biden’s inauguration and “take over.”

“Do whatever you got to do to fucking get your tickets,” he says. “You show up there in Biden gear and you turn his inauguration into a fucking circus, a sign of resistance, a sign of revolution….

“You fucking kick off this presidency with fucking fireworks.”

On that episode, Tarrio and Biggs encouraged members to go to Washington, D.C. on December 12 to protest the election results. That day saw violence, vandalism, and other havoc in the nation’s capital. Four people were stabbed, including some Proud Boys. Dozens were arrested.

Video after video showed the Proud Boys in the thick of it all, just as Biggs and Tarrio had urged.

Scenes such as those captured on video that day have become disturbingly common these last few years. In recent weeks, politically-motivated violent conflict has escalated towards a crescendo that leaves many watching at home worried about how it will all end.

In the first episode of The War Boys, Biggs characterized the political divide as one between “good and evil.” On the Nov. 20 episode, they suggest that all Democrats should be executed, an increasingly common refrain in far-right circles, including the QAnon conspiracy theory.

“The same party that said if we lockdown for a month, we can flatten the curve, we can go back to normal,” Biggs says. “…They are con artists. They are evil scum and they all deserve to die a traitor’s death.”

“Yup,” replies a Proud Boy who calls himself Rufio Panman, “the day of the rope.”

Panman is best known for his appearance in Oregon-based, far-right group Patriot Prayer propaganda recruitment video in which he knocks out someone identified as anti-fascist. His real name is reportedly Ethan Nordean.

Like Patriot Prayer, the Proud Boys have spent the last few years capitalizing on backlash to anti-fascism and anti-racism. Although it denies being racist and does include non-white members, in the nation’s capitol this weekend, Proud Boys burned Black Lives Matter signs, including at historically Black churches.

Encouraged by baseless claims the election was stolen from President Donald Trump, his most hardcore supporters like the Proud Boys are increasingly calling for abandoning democratic norms and principles, for violence as resistance and lawlessness as protest. Amid rising unrest, America appears to be tearing itself apart from the inside.

The Proud Boys are thrilled. They’ve got a taste for blood and they want more. And they’re pushing for it on YouTube using similar calls as got an episode of former Trump adviser Steve Bannon’s show War Room Pandemic removed from the site, and booted entirely from Twitter.

Much like Bannon, the Proud Boys relish the chaos they sow. On The War Boys, Tarrio, who claims he was invited to the White House on Saturday, which the administration denied, called the contested election “the best thing to happen to us.”

Since the election, they’ve shown up on the streets of Washington, D.C. several times. Violence, mayhem, and arrests often follow. Along with their other platforms that are welcoming to fringe right-wing groups, the Proud Boys have been using YouTube to promote these events. And they’re not done yet.

Biggs has in recent days vowed that the Proud Boys will return to the nation’s capitol on Inauguration Day “bigger and stronger than ever.”

At times they attempt to tone down the rhetoric, such as after Biggs was contacted by the Federal Bureau of Investigation. But as Washington, D.C. showed again last weekend, when the Proud Boys show up, they’re more than happy to fight. While they typically claim that they’re simply defending themselves and that the other side instigates violence, often the opposite is true.

In September, Joanna Mendelson, associate director of the Anti-Defamation League’s Center on Extremism, told the Los Angeles Times that the group operates in a way that essentially assures violence.

“Proud Boys have carved out this niche for themselves as both this right-wing fight club and a volunteer security force for the GOP,” she said. “And they purposely organize and act in a manner that will all but guarantee violence.”

For these reasons, the Proud Boys group and individual members have been banned time and again from social media platforms. Biggs himself has been reportedly banned by Facebook and Twitter. In June, YouTube suspended McInnes for glorifying violence. Yet the company has thus far given the cast of The War Boys free rein.

YouTube’s policies broadly prohibit content that recruits, promotes, or glorifies violent criminal or terrorist organizations, is by said organizations, or praises their actions or symbols. The company says that it doesn’t allow hate speech.

Advocating a terrorist or violent criminal act is clearly against the rules. Most would find it hard to construe Tarrio encouraging Proud Boys to sneak into Biden’s inauguration, turn it into a “sign of revolution” and “kick this fucking presidency off with fucking fireworks” a call for peaceful demonstration.

While his Parler account is rife with vows to “whoop some ass” of Black Lives Matter advocates and boasts about having “Antifa scum on the run all night crying like little bitches,” on The War Boys, Biggs sometimes makes a winking, half-hearted effort to claim he’s not inciting violence.

“Here’s another thing. It shouldn’t take us telling you to do this,” Biggs said after Tarrio urged Proud Boys to sneak into the inauguration, “…Everyone watches my fucking social media along with Enrique; if I give orders to something and someone goes and does something stupid, that means I incited something and I’m going to jail forever.

“So I’m smart by not saying something like that. But it shouldn’t take someone like me to tell you to get off your fucking ass and fight for your fucking country.”