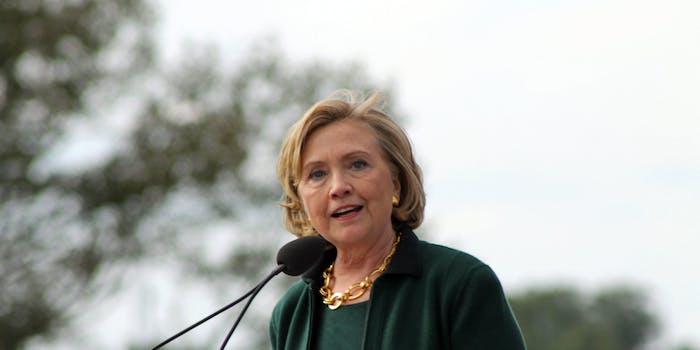 Videos show people unhappy with the results of the presidential election chanting outside the homes of Hillary Clinton and Michigan Secretary of State Jocelyn Benson over the weekend. In the latter instance, protesters were reportedly heavily armed.

One of Clinton’s neighbors reportedly took a video in which cries of “Lock her up” can be heard echoing through the forest surrounding the former first lady’s suburban New York home. “Lock her up” was a common refrain at President Donald Trump’s 2015 and 2016 campaign rallies.

Even though she lost the election, Trump supporters have remained unnaturally fixated on Clinton since then.

In an arguably more frightening episode, dozens of armed protesters surrounded the private residence of Michigan’s Secretary of State.

In a video posted by one of the protesters, they chant, “Stop the steal!” and shout that Benson, the state’s chief election officer, is a threat to America and accuse her of ignoring widespread voter fraud. A statement later released by Michigan Attorney General Dana Nessel and Wayne County prosecutor Kym Worthy said that some protesters were also yelling, “You’re murderers,” likely a nod to the QAnon conspiracy theory that a Satanic pedophile cabal controls the planet.

Since losing to President-elect Joe Biden, Trump and his allies have repeated an endless stream of baseless claims about election fraud in an attempt to overturn Trump’s loss.

People online were largely horrified by both actions. Many opined that each was yet another sign of cult-like behavior by Trump supporters. Some felt that their conduct, particularly in Michigan, should be considered criminal.

Phillip Lewis of HuffPost noted the parallel between those targeting Benson and October’s foiled plot to kidnap Michigan Governor Gretchen Whitmer and overthrow the state’s government.

In a statement, Benson said that she and her four-year-old had just finished putting up Christmas decorations when their home was surrounded by protesters “shouting obscenities and chanting into bullhorns” on Saturday night.

Benson, a Democrat, said that she supports the right to peaceful protest, but differentiated such from “gatherings […] done with the primary purpose of intimidation of public officials who are carrying out the oath of office they solemnly took as elected officials.”

Benson derided those spreading false information about the election, calling the various maneuvers and falsehoods spread by Trump’s camp “an unprecedented, dangerous, egregious campaign to erode the public’s confidence in the results of one of the most secure, accessible and transparent elections in our state’s history.”

She added that those targeting her were truly threatening the 5.5 million Michiganders who voted in the election.

“But their efforts won’t carry the day,” she wrote. “Because our democracy is strong.”