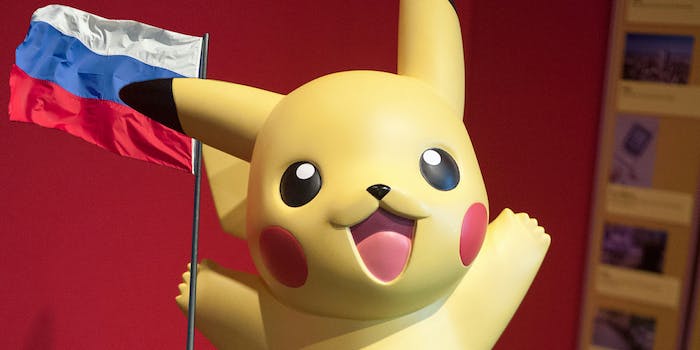 Not even Pokémon Go was safe from Russia‘s efforts to interfere in American politics ahead of the 2016 election.

The group used a campaign called “Don’t Shoot Us” and was run through the Russian “troll farm” that was the focus of hundreds of accounts Facebook said it took down after it discovered a massive web of accounts and ads that were stoking tensions online ahead of last year’s election.

CNN reports that the campaign, apparently referencing the “Hands Up, Don’t Shoot” slogan that rose in prominence after the 2014 shooting of Michael Brown in Ferguson, Missouri, was used to encourage Black Americans to protest and have other Americans see “Black activism as a rising threat.”

The group’s Facebook, Instagram, and Twitter accounts have been suspended. Its YouTube channel and website were active as of Thursday, CNN reports, and its Tumblr page currently posts about Palestine. The group’s website, dontshoot.us, was registered to someone named “Clerk York” in Illinois–and public records show no one by that name lives in the state, CNN reports.

As for Pokémon Go, the group encouraged people to find and train Pokémon in the augmented reality game near areas where alleged incidents of police brutality took place and give Pokémon names of victims. CNN reports that a contest run by “Don’t Shoot Us” offered people Amazon gift cards if they won.

CNN was not able to find evidence that the ploy worked, nor any instances in which the group distributed Amazon gift cards. So, while Russians may have attempted to use the game to sow discontent, the effort may have failed.

“It’s clear from the images shared with us by CNN that our game assets were appropriated and misused in promotions by third parties without our permission,” Niantic, the makers of Pokémon Go, said in a statement to the news outlet.

Russia’s attempts to influence the election by stirring discontent and misinformation through the use of social media has been under scrutiny in recent weeks. Both Facebook and Twitter found ads and accounts that were associated with the influence attempts, and officials from the social media giants are expected to testify before Congress on Nov. 1.